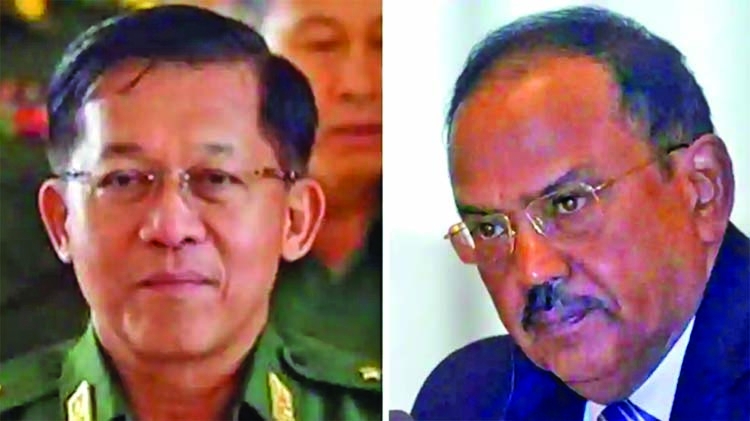 NSA Ajit Doval had been working with Myanmar military's commander-in-chief Min Aung Hlaing to get the Indian insurgents deported -Agencies
The Myanmar military handed over a group of 22 northeast insurgents to the Indian government on Friday afternoon. The insurgents, wanted in Manipur and Assam, have been brought back by a special plane, people familiar with the development told Hindustan Times.
"This is a huge step for the Myanmar government and a reflection of the deepening ties between the two countries," a top government official said soon after an aircraft with a planeload of insurgents took off from Myanmar.
The plane first made a stopover in Manipur capital Imphal, before heading to Assam's Guwahati. The insurgents have been handed over to the local police in the two states.
"This is the first time that the Myanmar government has acted on India's request to hand over leaders of the northeast insurgent groups," a senior national security planner said about the operation driven by National Security Adviser Ajit Doval. This is seen as a result of increasing intelligence and defence cooperation between the two countries from both sides.

Among those deported by Myanmar are some senior and long-wanted Indian insurgent leaders such as NDFB (S) self-styled home secretary Rajen Daimary, Capt Sanatomba Ningthoujam of UNLF and Lt Pashuram Laishram of PREPAK (Pro).
12 of the 22 insurgents are linked to four insurgent groups in Manipur: UNLF, PREPAK (Pro), KYKL and PLA. The remaining 10 are linked to Assam groups such as NDFB (S) and KLO.
The treacherous terrain along India's over 1,600-km border with Myanmar makes the area ideal for camps of insurgent groups that have been fighting the Indian state for decades.
But pressure has been building on the insurgent groups over the last few years after the Myanmar military agreed to conduct operations.
Last year, the Myanmar army carried out continuous operations through February and March 2019 on the basis of pin-pointed intelligence provided by Indian security agencies.
The Myanmar army attacked multi-group terror camps at Taga in the north of the country across the Vijaynagar salient in Arunachal Pradesh in the first phase, and decimated Arakan, Nilgiri and Haukyat camps in the second.
The 22 insurgents were caught by the Myanmar army in Sagaing Region in these operations.

A national security official said Myanmar's decision to hand over the insurgents is a huge message to the outfits that Naypyidaw is in sync with New Delhi on dealing with them.
Indian officials expect Myanmar's action to be a deterrent to groups that had assumed the dense forests across the border could insulate them from action. Just as the one created by the United Arab Emirates, once considered a haven for Indian criminals on the run, when it started deporting criminals and terrorists wanted in India.
"If Pakistan also acted against terrorists as these two countries do, then there would hardly be any terror group there too," a senior national security official lamented.