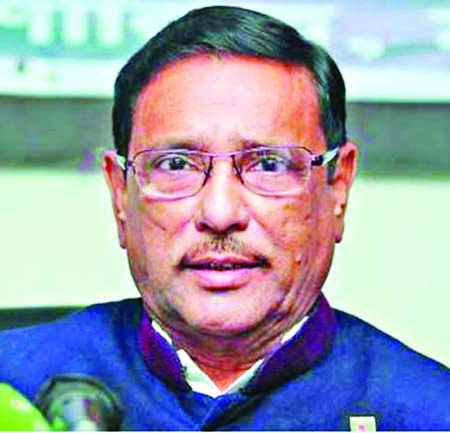 Awami League General Secretary Obaidul Quader on Friday said at a video conference that a vested quarter at home and abroad is doing mockery with fabricated and false information through social media to tarnish the image of government amid the cornavirus pandemic in the country.
He said such conspirators using social media are propagating the issue of coronavirus infection, death toll and all other information. But the government is taking necessary steps to keep the people protected from coronavirus infection through health management and also to treat the infected as far as possible. These people with an ill motive blame the government that digital security law is being misused. Any person responsible for plotting crime and instigating crime must be punished by law enforcement agencies in the country.

Digital security law was enacted to control cybercrime, he said. Quader said if any unwanted incident occurs in the application digital security law, the victim can contact the government officials concerned. The government led by Prime Minister Sheikh Hasina is very responsive and remains busy with piles of work in order to face multiple challenges of deadly attack of coronavirus in the country.

In the meantime, she has announced economic stimulus worth of Taka one trillion, provided ten million people with ration cards. 5 million ultra poor together people deprived of employment are getting financial assistance, he said. Prime Minister's roadmap of allocating economic stimulus to various sectors in order to give impetus to the wheel of economy and to overcome the crisis is unprecedented.
The measures taken by the government to face the challenges are being warmly accepted at home and abroad, Obaidul Quader said. Bangladesh Press Council (BPC) Chairman Justice Mamtaj Uddin told The Asian Age that the absurd information through social media and other digital media are being used and it is certainly an offensive crime. Intentional propaganda against the government to tarnish its image is like committing a crime. But digital security law is not against the print media.
If information over digital media is published without paying attention to the facts is certainly offence. Before writing anything, one has to crosscheck, be realistic and reasonable, he said. Former Vice Chancellor of Dhaka University AA MS Arefin Siddique told The Asian Age that the digital security act is not a barrier to the mainstream journalists.
Those providing wrong information through social media and other digital options must be punished under the act, he said. The video conference at PM's Dhanmandi office was attended by AL Presidium Member Begum Matia Chowdhury, AL Advisory Council Member AKM Ramat Ullah, Social Welfare Secretary Sujit Roy Nandi, Health Affairs Secretary Dr. Rokeya Sultana and Deputy Office Secretary Sayem Khan.