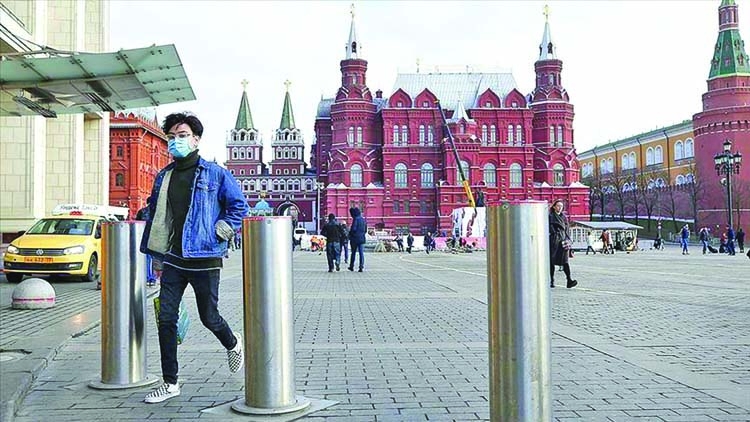 Russia's coronavirus case tally rose above 260,000 on Friday, cementing its status as the country with the second highest number of infections after the United States, as the city of Moscow began offering free antibody tests. Russia's death toll rose by 113 overnight to reach 2,418, Russia's coronavirus task force said, while the case tally jumped by 10,598 to hit 262,843.
Moscow, the epicentre of Russia's outbreak, started mass antibody testing of residents on Friday to try to work out what portion of the population has already been infected and to identify infected people with no symptoms.
Sergei Sobyanin, Moscow's mayor, has promised over 200,000 such tests a day by the end of May, and said the programme will help him decide how and when to ease lockdown measures which have forced many businesses to close.
Though Russia was quick to seal off much of its border with China to try to reduce the spread of the virus it was slower to close down European travel.
Many richer Russians caught the virus during their annual ski holiday at the French ski resort of Courchevel in March, six Russians familiar with the matter told Reuters, three of whom fell ill after their own trip there.
One of them, Alexander Sorkin, a wealthy Russian restaurateur, flew back via Geneva on March 9 and was diagnosed with the virus several days later. He said he knew of at least 60 others with virus symptoms after the trip.
"A ski resort is the perfect environment for breeding coronavirus. It's just the right temperature and there is a huge social life," said Sorkin, who has now recovered.
Ellina Litvinchuk, who works for a Russian fashion brand and tested positive for the virus after such a holiday, said that most of the 30 people she travelled with to Courchevel in early March had also got sick on their return.
Musa Bazhayev, president of Russian Platinum, one of the world's major producers of the metal, and tycoon Mikhail Prokhorov were in Courchevel around the same time, three people who know them said.
Bazhayev was later taken to hospital with symptoms of the virus, three sources said. Bazhayev's spokesman declined to comment.
A spokeswoman for Prokhorov said the businessman "has not been and is not being treated for COVID-19 and has no indications of illness."
Petr Tushkevich, World Kitesurfing Champion, told Reuters he was taken to hospital with the virus after his return from Courchevel.
One Russian banker, who declined to be named, said he knew a number of people who returned on the March 9 flight from Geneva but then ignored an order from Moscow authorities to self-isolate for two weeks.
--Reuters