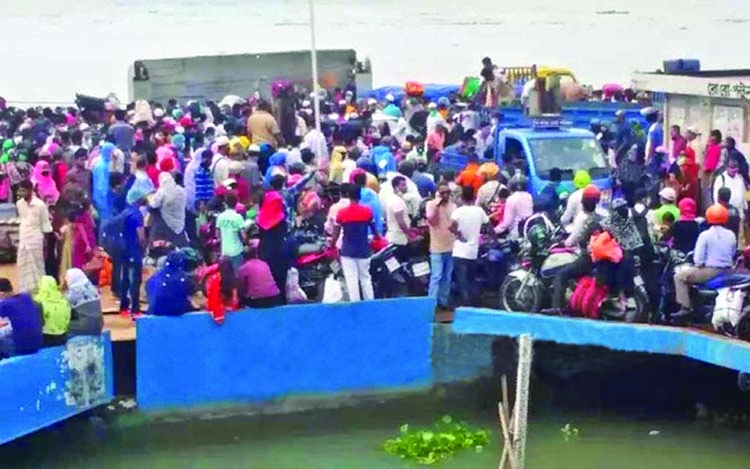 Travellers have crammed into ferries at Munshiganj's Shimulia to cross the Padma river to 21 southern districts despite coronavirus scare with around 10 days left to Eid-ul-Fitr.
They were trying to leave Dhaka on Friday to beat a strict travel ban which is to begin four days before the festival, an official said."It appears that they are returning home after Eid shopping in Dhaka," said Sirajul Kabir, an inspector of Naval Police at Mawa.
"It has happened because the readymade garment factories and shops did not reopen on a large scale as the government has extended the general holiday, ordering all to stay in their own areas during Eid," he added.  Thousands were waiting for the ferries in the morning and rushing onto the vessels whenever a ferry arrived. It delayed the boarding of vehicles on the ferries, creating a one and a half kilometre-long tailback.
Md Shafiqul Islam, the assistant general manager of Bangladesh Inland Water Transport Authority at Shimulia pier, said they were facing difficulties in loading and unloading vehicles due to the pressure of passengers. But many stood afar while waiting for a place on the ferries ensuring physical distancing to avoid the risk of infection. Shafiqul said their staffers were scared to get near the travellers to control the crowds after one of the BIWTA employees contracted the coronavirus.
---bdnews24.com