We could cut off whole relations with China: Trump 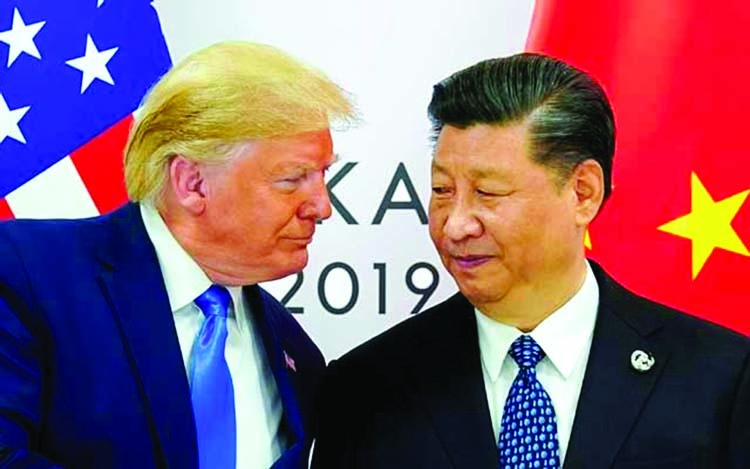 US President Donald Trump meets with China's President Xi Jinping at the start of their bilateral meeting at the G20 leaders' summit in Osaka, Japan, June 29, 2019. -Reuters
In an interview with Fox Business Network broadcast on Thursday, Trump said he was very disappointed with China's failure to contain the disease and that the pandemic had cast a pall over his January trade deal with Beijing, which he has previously hailed as a major achievement.
"They should have never let this happen," Trump said. "So I make a great trade deal and now I say this doesn't feel the same to me. The ink was barely dry and the plague came over. And it doesn't feel the same to me." Trump's pique extended to Xi, with whom the US president has said repeatedly he has a good relationship.
"But I just - right now I don't want to speak to him," Trump said in the interview, which was taped on Wednesday. Trump was asked about a Republican senator's suggestion that US visas be denied to Chinese students applying to study in fields related to national security, such as quantum computing and artificial intelligence.
"There are many things we could do. We could do things. We could cut off the whole relationship," he replied.
"Now, if you did, what would happen? You'd save $500 billion," Trump said, referring to estimated US annual imports from China, which he often refers to as lost money. Meanwhile, US Treasury Secretary Steven Mnuchin told Fox Business Network China needed to provide a lot more information about the coronavirus and Trump was reviewing his options.

"The president is concerned. He's reviewing all his options. Obviously, we're very concerned about the impact of this virus on the economy, on American jobs, the health of the American public and the president is going to do everything to protect the economy and protect American workers," Mnuchin said.

Trump and his Republican backers have accused Beijing of failing to alert the world to the severity and scope of the coronavirus outbreak and of withholding data about the earliest cases. The pandemic has sparked a sharp global recession and threatened Trump's November re-election chances.

The United States has been hardest hit by the pandemic, according to official data.

China insists it has been transparent, and amid increasingly bitter exchanges both sides have questioned the future of the trade deal.