'I’m training hard to come back strong for PSG' 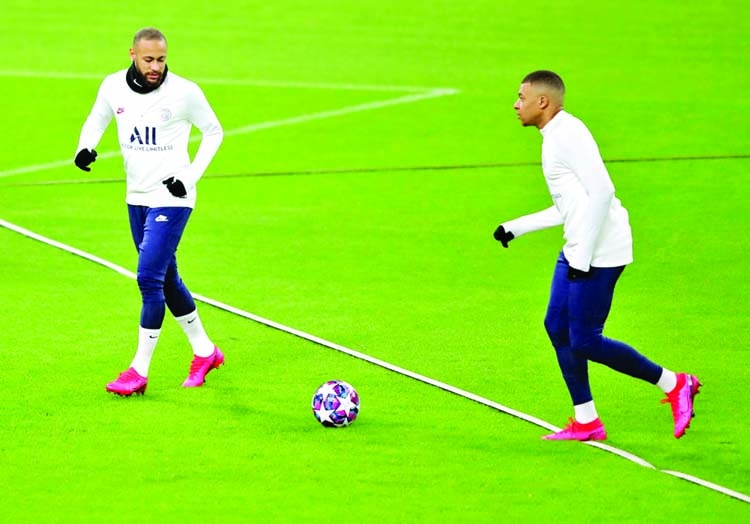 Paris Saint-Germain star Neymar in action with teammate Kylian Mbappé during training session. -Getty
Paris Saint-Germain star Neymar says that he is "training hard" to return to action in prime shape, despite being unclear when he might be needed again, report Goal.com.
Ligue 1 has officially ended for the season, with PSG taking the title for a third consecutive time, but Thomas Tuchel's side remain active in the Champions League, having fought back from a first-leg deficit to overcome Borussia Dortmund 2-0 in front of an empty Parc des Princes and progress through 3-2 on aggregate.
UEFA still aims to play the tournament to its conclusion, and while no dates have officially been set, the world's most expensive player is fired up to feature when called upon.
"The aim is to be ready for when they signal the return of club activities, so I can be in the best possible condition," the 28-year-old said. "I'm here, training hard, with the same rhythm and frequency that I would with the club. Training even harder actually, with more activities to compensate for the lack of games. "Of course I miss the competition, but fitness coach Ricardo Rosa set up a programme that I have been following to the letter."
Neymar has posted a video of his fitness programme to his Instagram account, documenting his efforts to stay as sharp as possible during his period of lockdown in Brazil. "We've been trying to hold sessions during the morning then in the evening," Rosa explained.
"We've been working in the most focused of ways because we don't know the date we'll be returning to our activities or when games will return.
"It's been good and the outcomes have been good. We've been working on Neymar's strength here at the gym, varying that with training in a sandbox and playing footvolley.
"We've been trying to keep Neymar healthy, with a good level of skill and performance so that we can return to France at any moment as nothing was established in a positive manner. So there's a variety of work to do. We've also been doing work to prevent him becoming injured and working on his cardiovascular system."
Neymar has scored 18 goals in 22 outings in the 2019-20 season, including three in four Champions League matches.