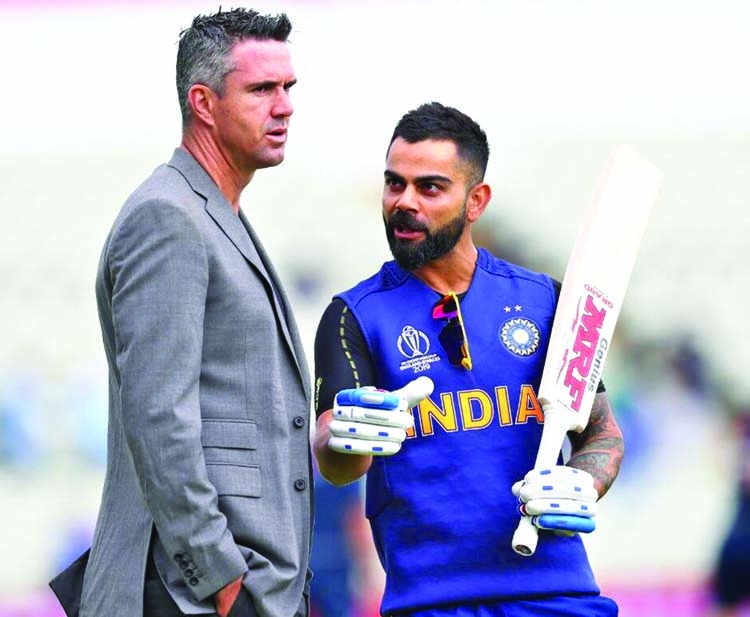 Indian skipper Virat Kohli sharing thoughts with former England star Kevin Pietersen during ICC World Cup 2019 in England. -Getty
Steve Smith''s accomplishments pale in comparison to Virat Kohli''s "unreal numbers" and the Indian captain has outstripped even the great Sachin Tendulkar with his mastery of chases, feels former England star Kevin Pietersen.
Smith and Kohli are among the leading batsmen in the world now but for Pietersen, the Australia doesn''t even come close to the Indian superstar. "Kohli, hands down. Freakshow. His record chasing, winning games for India with the amount of pressure he consistently lives under, Smith doesn''t even come close," Pietersen told former Zimbabwe cricketer Pommie Mbangwa during an Instalive.
When Mbangway asked Pietersen to choose between Kohli and Tendulkar, he said: "Again Virat because of his chasing numbers. His chasing numbers are frightening. He averages 80 in chases, all his one-day hundreds come when chasing. "He consistently wins games of cricket for India. He just keeps on turning the numbers, chasing, chasing, chasing."
Winning games for the country is much more important than individual performances, said Pietersen. "That''s what drives me. My Man of the Match performances. It was not the way that I played or how I played. How many Man of the Match performances and how many games that you win for England. And he (Kohli) does that for India. Unreal numbers," added Pietersen.
Kohli, who has scored 70 international hundreds, averages more than 50 in all three formats. Smith, on the other hand, averages higher than Kohli in Tests with 7227 runs in 73 games at 62.74.
Kohli has scored 7240 runs in 86 Tests at 53.62. The Indian star averages 59.33 and 50.80 in ODIs and T20s, while Smith averages 42.46 and 29.60 respectively, in the two formats.
---PTI