'Bangladeshi supporters are very loyal to the country' 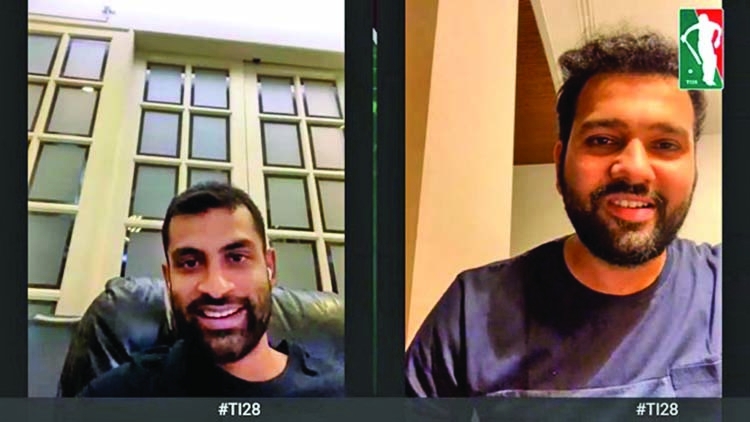 Screen shot from a live video chat between Tamim Iqbal (L) and Rohit Sharma. -Facebook
India's opener Rohit Sharma termed Bangladeshi supporters a very loyal to the country, stating that Bangladesh is the only country 'Where we don't get much support, report BSS
Considered as one of the best openers that world has ever seen, Rohit Sharma's statement came during a live conversation with Bangladesh ODI skipper Tamim Iqbal on facebook and Tamim's Youtube channel on Friday night.
"We have played in many countries and we always get the supporters behind us but Bangladesh is the only country where we don't get that support," Rohit Sharma said. Rohit Sharma was the second foreign cricketer who attended Tamim Iqbal's unique programme 'Tamim's Live Show' after South African star batsman Faf Du Plessis.
"We know still we have 200/300 supporters in the stadium when we play in Bangladesh. But the Bangladeshi supporters' collective response was such deafening that those 200/300 supporters response just couldn't find any way. Bangladesh team is lucky to have such supporters," he added.
In response to Rohit Sharma, Tamim Iqbal also savoured the support they get from their fans every time they come to the ground for any match against any opponents. "There is no denying fact in it that we always get extreme support from our fans. They also stand by us in our every difficulty. Our fans are really crazy for Bangladesh team," Tamim said.
During the Covid-19 pandemic, Tamim's unique show created a buzz amongst the fans as he uncovered various interesting stories from his colleagues, much to the delight of the fans.
The southpaw came to live in the first two sessions with former Bangladesh skipper cum wicket-keeper batsman Mushfiqur Rahim and the T20 captain Mahmudullah Riyad respectively on Instagram live. He later moved the program to his Facebook and Youtube channel where former Bangladesh ODI captain Mashrafe Bin Mortaza, pacers Taskin Ahmed and Rubel Hossain have appeared and shared some of their unknown stories.
Tamim also invited three former Bangladesh skippers Khaled Mahmud, Habibul Bashar and Naimur Rahman as his guests to share the past history of Bangladesh Cricket before he went live with South African star batsman Faf Du Plessis. He, however, invited Test captain Mominul Haque, dashing batsman Soumya Sarkar and Liton Das in his show, which will be aired this Saturday night at 10.30 PM.