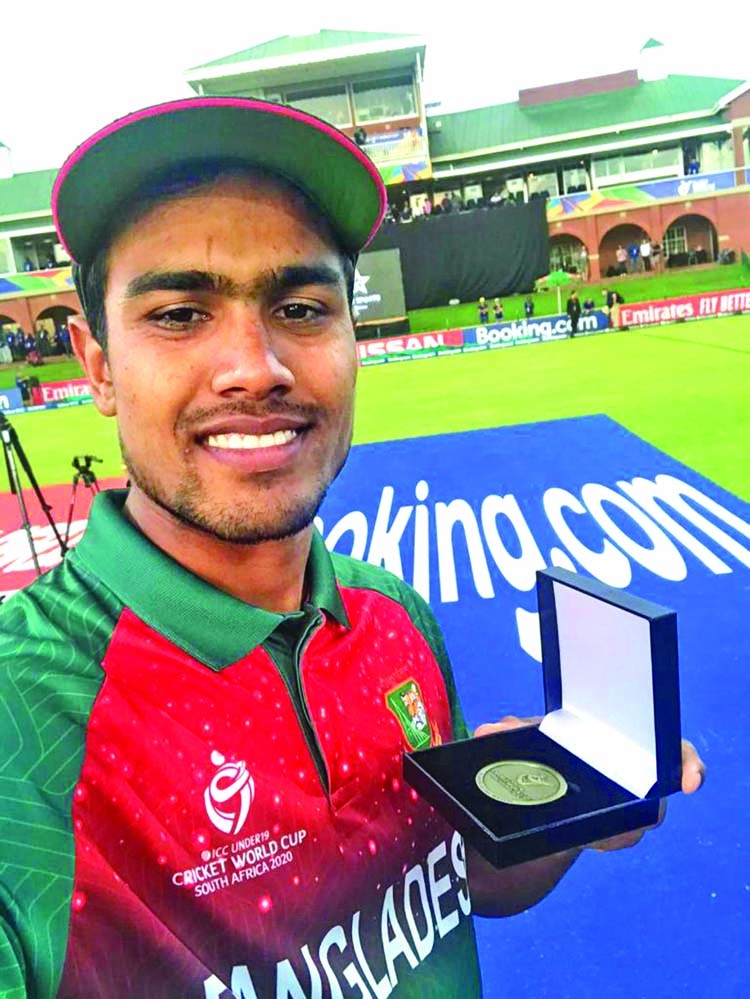 Bangladesh U-19 skipper Akbar Ali pose for a photo after winning the man of the award in the ICC U-19 World Cup 2020 final. -Twitter
Cricketers around the world, are doing their bit by putting up their cricketing gears for auction to generate funds to combat this deadly disease, which has infected more than 4 million worldwide.
Bangladesh superstars like Shakib Al Hasan, Mushfiqur Rahim, Soumya Sarkar have also auctioned their bats. Everyone has the same goal, to help the people affected by the Corona.
Bangladesh world Cup-winning youth team Captain Akbar Ali has recently put the jersey and batting gloves which he used against India in the U-19 World Cup final up for live auction.
However a Bangladeshi living in the United States bought his jersey and gloves, NIBCO Sports Management confirmed in a press release. The expatriate bought it at a price of USD 2,000 in the auction that lasted for 5 days through the online medium Pickaboo. Akbar's jersey and gloves cost about 1 lakh 70 thousand taka in Bangladeshi currency. The proceeds will go towards Covid-19 relief work in Bangladesh.
Pickaboo's partner in the auction was NIBCO, they said in a statement, Md Reazul Islam Jewel, an expatriate Bengali from the United States, bought the jerseys and gloves used by Bangladesh Under-19 World Cup winning captain Akbar Ali in the Under-19 World Cup final by 2,000 USD.
The auction ended on last Thursday (May 14) but the winner was announced a day later on Friday (May 15). 'Sports for Life', a social initiative of NIBCO Sports Management, in partnership with Pickaboo and BRAC started the bidding on last Saturday night.
The auction includes Mushfiq's first double hundred bat, Under-19 captain Akbar Ali's batting Gloves and Jersey from the U-19 final Match, Mosaddek Hossain's bat he used during match-winning 24-ball 52 against West Indies in tri-series last year in Ireland, Naim Seikh's bat he used during 81 T20 knock against India and cricket fan Mr. Jashim's bat signed by all the players of World Cup 2011 and Mashrafe Signed cap in order to help the poor during this COVID-19 outbreak. The winners will be announced as soon as the bids for other items are verified and the money is collected, Nibco said.
Bangladesh's maiden U19 world title would not have possible without the player of the final Akbar's breathtaking knock who led from the front and kept his cool.
Meanwhile, ShahidAfridi, former Pakistan captain who bought Mushfiqur's first double hundred bat for Rs 1.7 million, has termed Mushfiqur Rahim a real hero for his outstanding job during crisis period.
In his official Facebook page, Afridi said," Assalamualaikum Mushfiq, what you're doing for your countrymen is truly amazing. Only real life heroes can do something like that. We are going through a tough time, and we need to support each other in order to recover from this situation."
"The amount of love and respect I have received from Bangladesh over the years will always be remembered. On behalf of the people of Pakistan and the Shahid Afridi Foundation, I would like to purchase your bat and be a part of your journey. My prayers are always with you and I hope Allah helps us recover from this pandemic. I hope to see you on the cricket field soon. Thank you."

Mushfiqur Rahim on Friday night said live on the Sports for Life Facebook page that former Pakistan cricketer Shahid Afridi had bought his bat for Rs 1.7 million.
The auction was halted after fraud bidders had flooded the process last week. The fake offers sent the price soaring over $50,000.  Talking to the journalists, Mushfiqur paid rich tribute to Afridi for extending support to a noble cause.
"ShahidAfridi bought my bat on behalf of his foundation," Mushfiqur said. "I feel privileged and honoured that someone like him has joined our great cause. We had to suspend the auction due to some fraud bidders, which was unexpected. Shahid bhai personally contacted me after seeing the news (of my bat put on auction). He sent an offer letter on May 13 that he was interested to buy for USD 20,000, which is almost BDT 16.8 lakh. I want to thank everyone concerned, which includes my very good friend Tamim Iqbal. He helped me a lot in this regard."
Some magic, some sport, and plenty of laughter - players have found innovative ways to stay home, stay safe and brighten our social media feeds. But cricketers are doing their bit to help those in need.