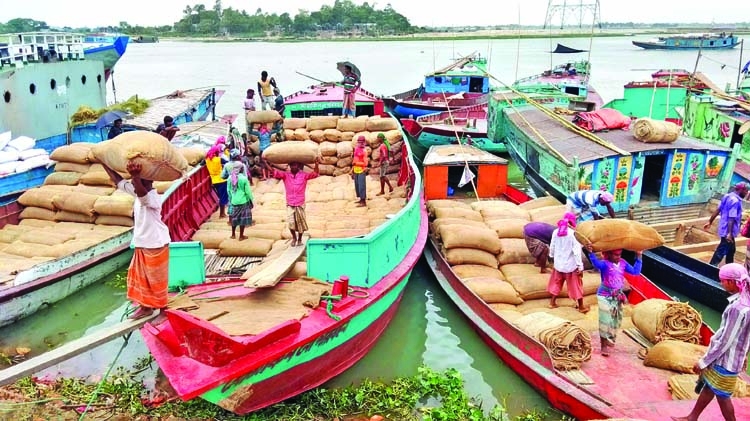 Laborers unloading sacks of paddy at the Ashuganj river port in Brahmanbaria on Saturday. -AA
While an expected bumper harvest of Boro paddy is in progress amid the ongoing Covid-19 pandemic, the country has scored the third global position in rice production this year surpassing Indonesia by a little margin, a report of the United States Department of Agriculture (USDA) has revealed.
The USDA's Economic Research Service (ERS) in its monthly report for May 2020 stated that the record production is projected based on a slight expansion in harvested area to 11.9 million hectares in the South East Asian country.
"Bangladesh is now the third largest global rice producing country, recently surpassing Indonesia," the USDA's ERS report says with the remarks: "Although a major importer for many decades, Bangladesh is now almost self-sufficient in rice."
This year, the Boro harvest is expected to 36 million metric tons against an annual consumption of 35 million metric tons for the country.
Rice production in Indonesia, the country that held its third position in rice production for years, is expected to be 34.9 million metric tons, according to the report.
Favorable weather, especially absence of seasonal natural calamities like flood, heavy rainfall and cyclones, proper irrigation and subsidized fertilizer together enabled the country to the record yield of Boro harvest, experts say.
"Record production and single notch up in global ranking is indeed the achievement of our farmers," said Md Nasiruzzaman, Secretary of Ministry of Agriculture. He said the use of modern technology can increase more the country's crops production including rice and other cereal towards achieving the target of becoming a food-solvent nation.
"Availability of fertilizer at reduced price helped farmers to take care of paddy field properly. It was possible under the aegis of the Prime Minister," he added.
Member at General Economic Division Dr Shamsul Alam said automation in the agriculture sector may be helpful in obtaining higher production target with the limited arable land in the country.
"We needed scientific method's application in agriculture," he added.
In the USDA report, the global production of rice this year was projected 502 million tons against the estimation of consumption and residual use of 498.1 million tons.
China and India positioned at top and second rice producing country, the USDA report says.