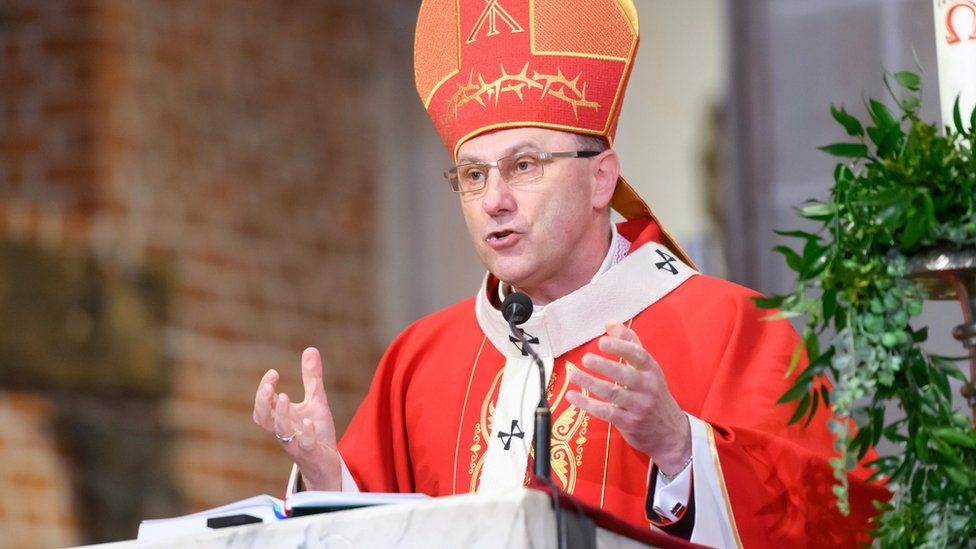 Steve Linick, who was appointed to detect mismanagement at the state department, was fired on Friday
The head of Poland's Roman Catholic Church has said he is asking the Vatican to investigate the cover-up of child sexual abuse by priests.
Archbishop Wojciech Polak called on the Church hierarchy to "launch proceedings" following the release of a documentary on the subject on Saturday.
The film tells the story of two brothers who seek to confront a priest who allegedly abused them as children.
The Vatican is expected to assign an investigator to the case.
The film - "Hide and Seek" - has been viewed more than 1.9 million times on YouTube. It is the second documentary on the subject by brothers Marek and Tomasz Sekielski.
It follows two victims as they attempt to bring to account those in the Church who were responsible for covering up their abuse.
It alleges that a senior bishop knew about the allegations for years but failed to take any action.
"The film... shows that protection standards for children and adolescents in the Church were not respected," Archbishop Polak said in a video released by the Catholic news agency KAI.
"I ask priests, nuns, parents and educators to not be led by the false logic of shielding the Church, effectively hiding sexual abusers," he said. "We do not allow for the hiding of these crimes."
Archbishop Polak added that he had asked the Vatican to investigate the allegations raised in the film under the auspices of an Apostolic letter that was issued by Pope Francis last year.
The letter made it mandatory for Roman Catholic clergy to report cases of clerical sexual abuse and cover-ups.
The first film in the series - "Tell No One" - was released by the Sekielski brothers in May 2019 and has been viewed more than 23 million times. It sparked widespread outrage and a national discussion about sexual abuse in the Church.
It includes secret camera footage of victims confronting priests about their alleged abuse. Some of the priests in the film admit to the abuse.
The documentary prompted the government to announce plans to double jail terms for paedophiles. It also promised to set up a commission to investigate paedophile priests, but this has not yet happened.
In March last year, the Polish Church admitted that almost 400 clergy had sexually abused minors over the past 30 years.