Israel to swear in unity government 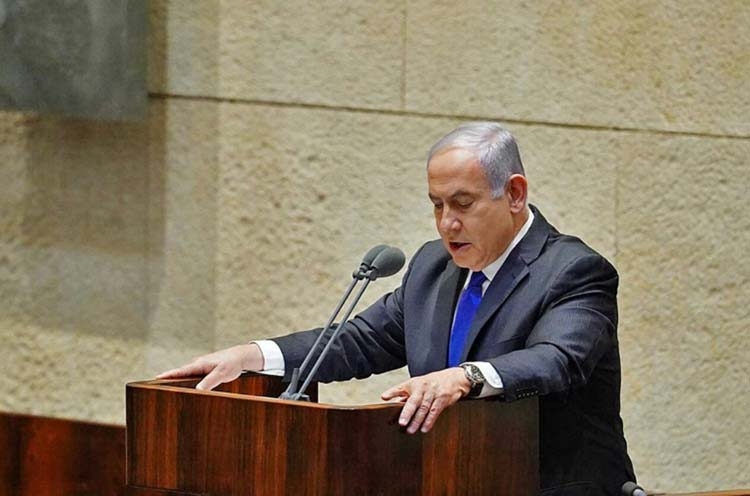 A picture provided by the Israeli Knesset shows Prime Minister Benjamin Netanyahu speaking ahead of the swearing-in of a unity government. -AFP
As Israel was set to launch its new unity government Sunday, Prime Minister Benjamin Netanyahu vowed to push on with controversial plans to annex large parts of the occupied West Bank.
Netanyahu said his incoming government to be sworn in under a hard-fought deal with his rival-turned ally Benny Gantz after more than a year of gridlock should apply Israeli sovereignty over West Bank settlements.
"The public wants a unity government and that's what the public is getting today," Netanyahu said at the start of the session in the Knesset, or parliament, in Jerusalem. "It's time to apply the Israeli law and write another glorious chapter in the history of Zionism," Netanyahu said on the issue of Jewish settlements in the occupied Palestinian territory.
Such a move is seen likely to cause international uproar and inflame tensions in the West Bank, home to nearly three million Palestinians and some 400,000 Israelis living in settlements considered illegal under international law. Netanyahu told the chamber that annexation "won't distance us from peace, it will bring us closer".
Israel's unity government was set to be sworn in amid the coronavirus crisis and after the longest political crisis in its history that saw three inconclusive elections and left it in political limbo for more than 500 days. The coalition government was agreed last month between veteran right-wing leader Netanyahu and the centrist Gantz, a former army chief.
Plans had been set for an inauguration last Thursday. But after 17 months without a stable government, Netanyahu asked for three more days to decide on cabinet assignments among his Likud party loyalists. With the outstanding disputes among Netanyahu's bloc apparently resolved, the Knesset met Sunday to begin the session set to culminate with the swearing-in.
Under the three-year coalition deal, Netanyahu will serve as prime minister for the coming 18 months -- a major victory for a leader due to stand trial in a week on corruption charges, which he denies. Gantz will be alternate prime minister, a new position in Israeli governance, for the first half of the deal, before he and Netanyahu swap roles. The new government's policy guidelines state as top priorities combatting the coronavirus and healing an economy battered by the pandemic.
The new government may be confronted with yet another international crisis in matter of weeks, centred on the West Bank. The Netanyahu-Gantz deal says the government can from July 1 initiate moves to implement US President Donald Trump's controversial peace plan for the Israeli-Palestinian conflict. The plan, rejected by the Palestinians, gives the green light from Washington for Israel to annex Jewish settlements and other territory in the West Bank.
Some experts warn that Jordan may back away from its historic 1994 peace deal with Israel if the Jewish state tries to annex the strategically crucial Jordan Valley border region.
Speaking to German magazine Der Spiegel days ago, Jordan's King Abdullah II said: "If Israel really annexes the West Bank in July, it would lead to a massive conflict with the Hashemite Kingdom of Jordan."
The European Union's foreign policy chief Josep Borrell said Friday that the bloc would use "all our diplomatic capacities" to try to dissuade Israel's incoming government from going ahead with annexations. Gantz and incoming Foreign Minister Gabi Ashkenazi are both known to have reservations about annexation and the international backlash.
Gantz in his speech Sunday did not mention the issue. He addressed criticism of his move to join forces with Netanyahu which split his Blue and White coalition, arguing that Israel needed unity after a year of bitter division.

"My friends and I chose unity to defend Israeli citizens, not just from the challenges from outside our borders but also from the hatred eating away at us from within and harming our resilience," he said.
The 35th government since Israel's creation in 1948 includes representatives from across the political spectrum, with a record 34 to 36 cabinet seats.
Cabinet posts have been assigned to the left-wing Labour party, Blue and White, Likud and leaders from conservative ultra-Orthodox Jewish parties.
The large cabinet and additional funds for the new position of alternate prime minister have prompted criticism as Israel seeks to address the economic fallout from COVID-19, which has infected more than 16,500 Israelis and caused more than 260 deaths.
Israel's Yediot Aharonot newspaper described the incoming government as "the most bloated and wasteful" in the nation's history, adding that it comes as "the Israeli economy is in an unprecedented state of emergency".