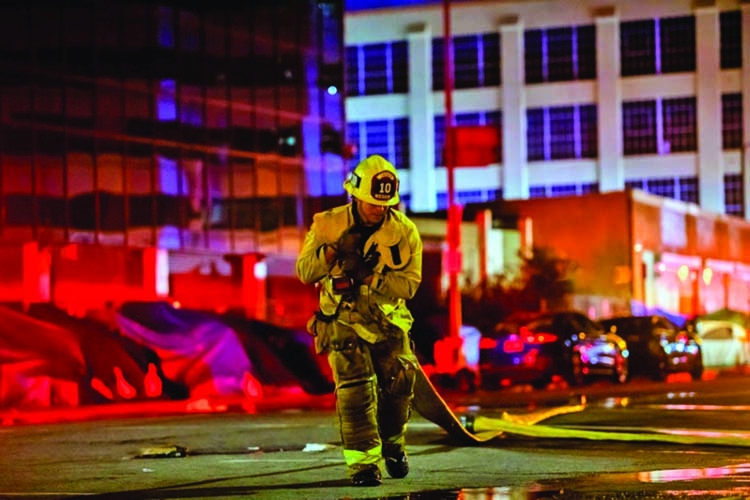 Crews had entered the building to battle what was initially thought to be a minor blaze. -AFP
Eleven firefighters were injured, three of them critically, in downtown Los Angeles when a fire in a commercial smoke shop sparked a major explosion and spread to nearby structures on Saturday evening, officials said.
Crews had entered the building to battle what was initially thought to be a minor blaze when they noticed that the smoke pressure was escalating and decided to evacuate, Los Angeles Fire Department chief Ralph Terrazas told reporters. He said the blast occurred as the firefighters were leaving the building from the roof and the ground floor. "A witness account is that our firefighters came down the aerial ladder from the roof with their turnout coats on fire," Terrazas said.
Los Angeles Mayor Eric Garcetti said three firefighters had critical but not life-threatening injuries and another had serious injuries, while the remainder had varying degrees of burns. "There are no symptoms of blast injuries but there's potential evidence of chemical inhalation," Garcetti said. "Good news is, everybody's gonna make it," he added. Terrazas said firefighters saw butane canisters inside the building and outside on the street but it was unclear what caused the blaze.
"Everything is under investigation by our arson team, all I can say at this point is that the cause is under investigation," he said. Some 230 responders battled the blaze as it spread to other buildings in the area before it was extinguished around two hours after it began. Fire officials said the building where the blast occurred housed a business -- Smoke Totes Wholesale Distribution -- that sold smoking and vaping paraphernalia and supplied other businesses that make butane honey oil, a highly flammable resin used for inhaling marijuana.
Several storefronts in the area were blackened by the force of the blast while one fire truck had a scorched roof and was covered with debris.
Thick smoke from the blaze was visible from miles away.
--- AFP, Los Angeles