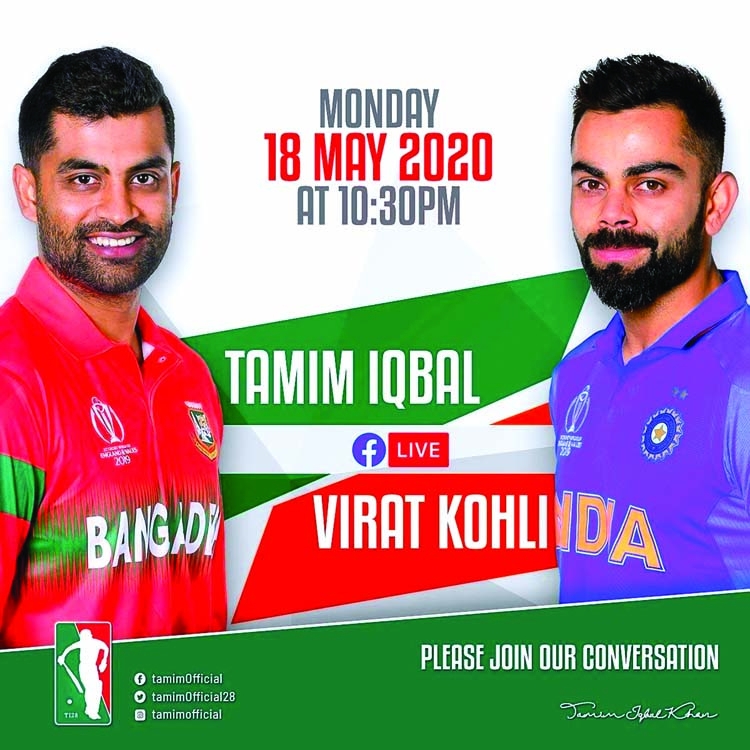 Bangladesh ODI captain Tamim Iqbal sprung a huge surprise in convincing Indian skipper and world famed cricketer Virat Kohli as the next guest of his programme 'Tamim's Live Show', which created quite sensation amongst the fans.
Touted as the biggest start of this contemporary cricket world, Kohli will on Tamim's show on Monday at 10.30 PM. The show will be available on Tamim's official facebook page and Youtube channel. Tamim's official Facebook page made the announcement in the early hours of Sunday.
"Surprise, surprise!!!Join me and Virat Kohli on May 18, Monday at 10.30pm," the facebook post read.
The man nicknamed "King" Kohli is considered to be the not only the best batsman in this era, but also one of the greatest of all time. Some cricket experts even believes that he will break the unique record of 100 centuries and most International runs by his compatriot Sachin Tendulkar.
Kohli is the only cricketer in the history who averaged 50 plus in all three formats of the cricket. In Test cricket, his average is though outnumbered by his rival Steven Smith, Kohli still maintains the best cricketer status, due to his performance in all three formats of cricket simultaneously. Specially he is renowned for his skill in run chasing, which, many experts, believes made him apparent from the other greatest cricketers.
Kohli will be unarguably the best ever guest in Tamim's live show that gives the fans a soothing pleasure as the country has been observing an unofficial lockdown since March 26 due to coronavirus pandemic.
Beforehand, Tamim streamed the one episode with Kholi's colleagues and another big star of the world Rohit Sharma. He also called up former South Africa captain Faf du Plessis for a session. Through his show, Tamim uncovered various interesting stories of his colleagues, which was completely unknown to the fans. Considered as one of the best batsmen in the country, opener Tamim has brought different guests for each episode.
Streaming the first two sessions with wicket-keeper batsman Mushfiqur Rahim and Mahmudullah respectively, Tamim moved the show to his facebook and youtube channel where his predecessor Mashrafe Bin Mortaza, pacers Taskin Ahmed and Rubel Hossain, Test captain Mominul Haque, swashbuckling batsmen Soumya Sarkar and Liton Das made appearances and shared some lighthearted moments.
In one episode, three former Bangladesh skippers Khaled Mahmud, Habibul Bashar and Naimur Rahman Durjoy came in as guests of Tamim's show and made the viewers travel to the past of Bangladesh cricket sharing different stories.