India extends lockdown to May 31 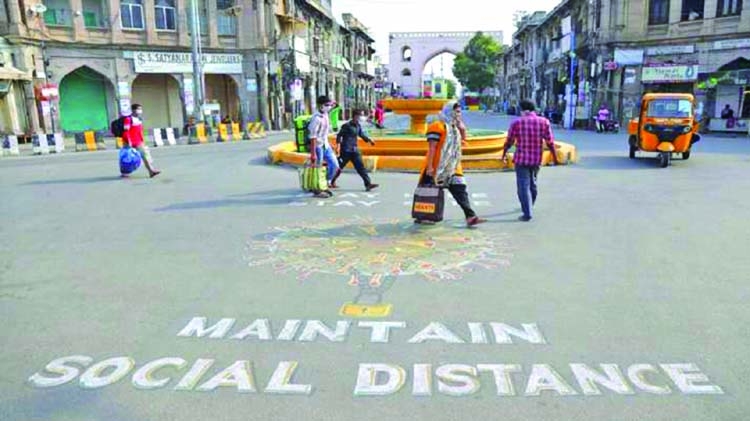 India on Sunday extended a nationwide lockdown to May 31, as coronavirus cases exceeded 90,000 and further clashes erupted between police and stranded migrants.
Schools, malls and other public places will remain mostly closed, though rules will be relaxed in areas with low numbers of cases, according to an order from the interior ministry. "New guidelines have permitted considerable relaxations in lockdown restrictions," the ministry said in a tweet accompanying the order.
Large gatherings are still prohibited, but outside of containment zones with high numbers of active cases "all other activities will be permitted", it said, potentially allowing commerce and industry to reopen across much of the country.
Decisions on where to set containment zones would be decided by district authorities, the order said.
India has now reported more cases than China, where the virus first emerged late last year, although deaths at 2,872 remain much lower than China's 4,600. The death toll in the United States and some European countries is much higher.
India's lockdown, introduced on March 25 and extended several times, had been due to expire at midnight on Sunday.
The curbs have sparked a crisis for the hundreds of millions of Indians who rely on daily wages to survive.
With no work - and little public transport - many urban migrants attempting to return to their home villages have set out on gruelling journeys on foot or hitched rides in the back of trucks. In Rajkot in the western state of Gujarat, more than 1,500 migrant workers blocked roads, damaged more than a dozen vehicles and threw stones at police on Sunday, after two special trains that were supposed to take them home got cancelled. A police official in Shapar told Reuters police baton-charged the migrants to disperse them, with several officers injured in the process. "The workers had not gathered with the intention of violence.
Two or three trains were rescheduled, but the workers misunderstood that the trains had been cancelled, and resorted to violence," Balram Meena, Rajkot's superintendent of police, told local media.
"We are identifying the people who were involved in the violence," Meena added.
At least 23 migrants were killed trying to reach their homes on Saturday when a truck crashed in northern India.
Sixteen migrant workers died on May 8 after being struck by a train. They had fallen asleep on the tracks while walking back to their village after losing their jobs in a coronavirus lockdown, police said.