One dead after air show jet crashes into home 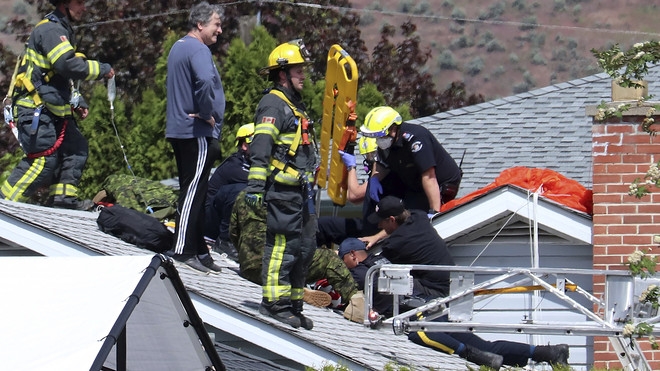 At least one person has died after an aerobatic Canadian air force jet crashed into a residential neighbourhood while doing a flyover.
Another crew member was seriously injured when the plane hit a house in the city of Kamloops, British Columbia.
One pilot was able to eject before the crash on Sunday, video showed.
The Snowbirds jet had been on a tour "to salute Canadians doing their part to fight the spread of Covid-19", according to the team's website.
The Snowbirds perform aerobatic stunts for the public, similar to Red Arrows in the UK or the US Blue Angels.
The crash happened on Sunday morning, shortly after the jet took off.
"It is with heavy hearts that we announce that one member of the CF Snowbirds team has died and one has sustained serious injuries," the Royal Canadian Air Force said in a tweet.
Video posted on Twitter showed two jets climbing into the air from what is believed to be the Kamloops Airport before one catches on fire.
Witness Annette Schonewille told CBC News: "The one plane continued and the other one, there was two puffs, it looked like puffs of smoke and one... was a ball of fire," she said.
"No noise, it was strange, and then the plane just did a cartwheel and fell right out of the sky. Just boom, straight down, and then a burst of black, black smoke."
After it hit the front garden of a home in Kamloops, residents ran outside in an attempt to put out the fire.
"I just started running down the street. And I got there maybe a minute after it crashed and there was a couple of residents that had their hoses out and they were trying to put the flames out because it hit a house," neighbour Kenny Hinds told the Associated Press.
"It looked like most of it landed in the front yard, but maybe a wing or something went through the roof."
Meanwhile, resident Nolyn McLeod told CBC he saw the plane curve into the street and hit the bedroom window of his neighbour's house.
Photos published in Canadian media appeared to show a parachute on the roof of the house.
The city of Kamloops is around 200 miles (320km) northeast of Vancouver in the West Coast Canadian province. It has a population of 90,000.
In October, a Snowbirds jet crashed into an uninhabited area before an air show in the US city of Atlanta, after the pilot ejected.