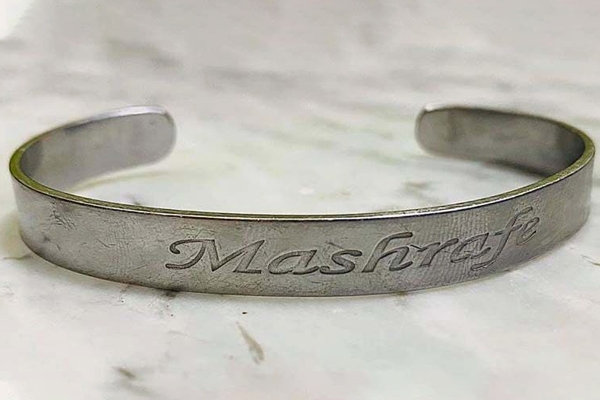 A bracelet which Mashrafe Bin Mortaza termed as his most favourite was sold at Tk 42 lakh (Approx.USD 50,000) in an online auction  on Sunday night.
Bangladesh Leasing and Finance Company Association (BLFCA), an association of financial institutions in Bangladesh, bought the historic bracelet of Mashrafe which was companion for 18 years.
The auction of Mashrafe's memorable  bracelet was made through "Auction 4 Action", which also auctioned the Shakib Al Hasan memorable world cup playing successful bat.
The  auction price started from Tk 5 lakh (Approx. 6,000 USD) and later it was sold for a record amount of Tk 42 lakh.
The entire money earned from the sale of the bracelet will go to Mashrafe’s ‘Narail Express Foundation’. From there the whole money will be spent for people affected by coronavirus pandemic.
About the auction Mashrafe  said, “Many people think that the bracelet is silver. But it is a steel bracelet. My favorite. The entire money from the sale of this bracelet will be spent for people affected by coronavirus. Not only in Narail, I will try to help people in different parts of the country other than Narail.”
Chairman of BLFCA  Mominul Islam, who took part in the auction on the behalf of their organisations, said, 'We bought the bracelet for 40 lakh. But, we will pay Tk 42 lakh adding five percent more to the principal amount. However, we would like to gift Mashrafe's bracelet to him again. The bracelet of our favorite captain will be with him. If the situation turns normal, we will handover the bracelet to Mashrafe  through a formal ceremony.”
After Mominul Islam’s announcement Mashrafe became surprised and emotional and said, “Thank you Momin Bhai, Thank you very much,  I have no pain if you take the bracelet, however, I  honour and respect your decision and finally thank you all.”
In his early days of his international career, Mashrafe used to wear a red and green bracelet. Later, he had a new silver bracelet which he has been wearing for 18 years.
Earlier, Auction 4 Action organised the auction of Shakib Al Hasan’s bat which was sold for Tk 20 lakh. Mushfiqur Rahim’s bat was sold for Tk 17 lakh, which was bought by Pakistan superstar Shahid Afridi’s charity - Shahid Afridi Foundation.
Apart from them, Taskin Ahmed, Soumya Sarkar and Akbar Ali also put their cricketing gear for auction for the novel cause.