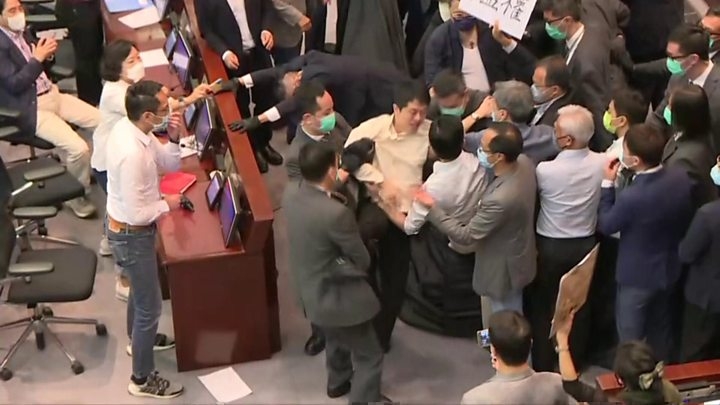 A number of pro-democracy lawmakers in Hong Kong were dragged out of the chamber during a row about a Chinese national anthem bill.
The bill would criminalize disrespect of the anthem.
Legislators were arguing over the leadership of a key committee, which would affect the bill's progress.
One of the lawmakers carried out, Eddie Chu, told the BBC: "If Hong Kong was a democracy, we would not need to start scuffles like this."
He added: "Unfortunately we are forced into this situation. I can foresee more fights within the chamber and outside the chamber."
The chaotic scenes highlight the deep divisions in Hong Kong, which is a special administrative region of China.
Although last year's street protests died down during the pandemic, some demonstrations are expected to resume.
It's the second time in recent days there have been scuffles in the Legislative Council.
What happened in the chamber?
The Legislative Council was in dispute over who should run the house committee, which scrutinises bills and decides when they are voted on.
Last week, the council president appointed Chan Kin-por, a pro-Beijing lawmaker, to oversee the election of a new leader.
On Monday - before the Legislative Council began - Mr Chan was in the chairman's seat, surrounded by more than 20 security guards.
As pro-democracy lawmakers entered the room, they tried to reach the seat, but were stopped by the guards.
As the guards used blankets to corral the protesters, others pointed and yelled from their seats.
One lawmaker held a sign that said: "CCP [Chinese Communist Party] tramples HK legislature."
During the melee - which went on for several minutes - at least one person fell to the ground, apparently injured.
At one point, a lawmaker took a running jump to try to reach the chairman's bench, but was stopped in mid-air by guards.
After most of the pro-democracy lawmakers left - or were removed - the pro-Beijing Starry Lee was elected chairwoman of the house committee.
This, her opponents fear, will make it easier for the national anthem bill to be passed.