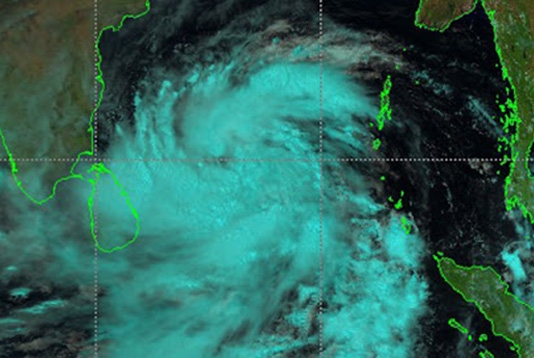 The cyclone “Amphan” over Southeast Bay and adjoining area intensified into a ‘very severe cyclonic storm’ over west central Bay and adjoining South Bay at 6am today as met office predicted it is likely to cross Bangladesh coast between Tuesday-Wednesday.
“The cyclonic storm “Amphan” over Southeast Bay and adjoining area moved northwards and intensified into a ‘very severe cyclonic storm’ laying over west central Bay and adjoining South Bay at 6am today and it may cross Bangladesh coast between Khulna-Chattogram during late night on Tuesday (May 19) to afternoon or evening on Wednesday (May 20),” said a met release issued this morning.
The cyclonic storm is likely to intensify further and move in a north-northwesterly direction and then re-curve north-northeastwards, it added.
Meanwhile, an Indian meteorological department’s bulletin said the extremely severe cyclonic storm “Amphan” (pronounced as UM-PUN) over central parts of South Bay of Bengal and adjoining central Bay of Bengal moved nearly northwards with a speed of 13kmph during past 6 hours and lay centered at 5.30 hrs Indian Standard Time (IST) of today over west-central and adjoining central parts of South Bay of Bengal, about 790 km south of Orishas, 940 km south-southwest of Digha (West Bengal) and 1060km south-southwest of Khepupara (Bangladesh).
It is very likely to intensify further into a Super Cyclonic Storm during next 12 hours, it said, adding that it is very likely to move north-northeast wards across northwest Bay of Bengal and cross West Bengal-Bangladesh coasts between Digha and Hatiya islands of Bangladesh during afternoon or evening on May 20 as a Very Severe Cyclonic Storm with maximum sustained wind speed of 155-165 Imphal gusting to 185kmph.
Storm surge of about 3-4 meters above astronomical tide is likely to inundate low lying areas of Bangladesh during the time of landfall, it also said.
However, Bangladesh met office bulletin also said rain or thundershowers accompanied by lightning flashes and temporary gusty or squally wind is likely to occur at a few places over Khulna, Barishal and Chattogram divisions and at one or two places over Rangpur, Rajshahi, Mymensingh, Dhaka and Sylhet divisions in next 24 hours as of 9 am tomorrow.
Mild heat wave is sweeping over Khulna division and the regions of Dhaka, Madaripur, Rangamati, Noakhali, Rajshahi, Pabna, Barishal and Patuakhali and it may continue, the bulletin said.
Day temperature may rise slightly and night temperature may remain nearly unchanged over the country.
Country’s maximum temperature on Sunday was recorded 38 degrees Celsius jointly at Rajshahi and Jashore and the lowest 22.4 degrees Celsius today was recorded at Badalgachhi.
The sun sets at 6.36pm today and rises at 5.14am tomorrow in the capital.