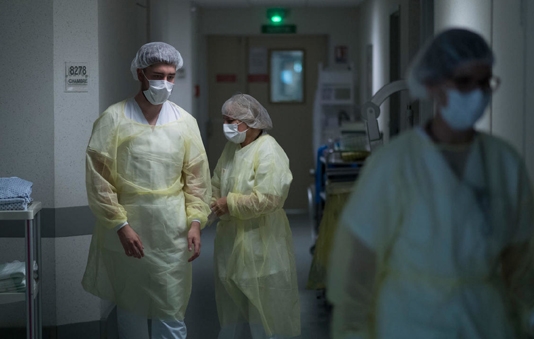 Deaths from the new coronavirus in France passed 28,000 Sunday, the health ministry announced, as officials tried to contain outbreaks in two abattoirs.
The latest daily toll, of 483, the largest in several weeks, was made up mainly of deaths in care homes: 429 deaths, compared to only 54 in hospital.
Those numbers took France’s total number of deaths from the virus to 28,108.
France’s health directorate, the DGS, was not able to tell AFP why there had been a sudden rise in the figures for deaths at care homes.
The figures had been updated from those provided by the regional health authorities, they said.
The figure for care home deaths have been corrected several times in recent days, reflecting the challenges officials face in collecting and collating the data.
– Abattoir ‘clusters’ –
Health officials meanwhile were battling to contain two outbreaks of the virus at abattoirs that are so far known to have infected around a hundred people.
One abattoir is in the central Val de Loire region near the city of Orleans. The other is in the northwestern region of Brittany.
Regional health officials said 63 of the 209 workers at the Breton slaughterhouse had so far tested positive for the virus.
At the slaughterhouse in Fleury-les-Aubrais, near Orleans, officials there said they had detected a “cluster” of 34 cases among the 400 workers. Another 40 were tested on Sunday with others following on Tuesday.
“According to the company’s human resources department, there were masks, gels, temperature readings at the entrance to the slaughterhouse and it seems that the protocol was followed,” said regional prefect Pierre Pouessel.
The overall picture in France, however, with a continuing fall in both hospital deaths and admissions for the virus, was better news.
Four regions, in the north and the east of the country — including the Paris region — account for 74 percent of the number of people being treated in hospital.
Since the virus arrived in France, 98,569 people have been hospitalised, of whom 17,500 had to be treated in intensive care. More thatn 61,000 have recovered and been allowed home.