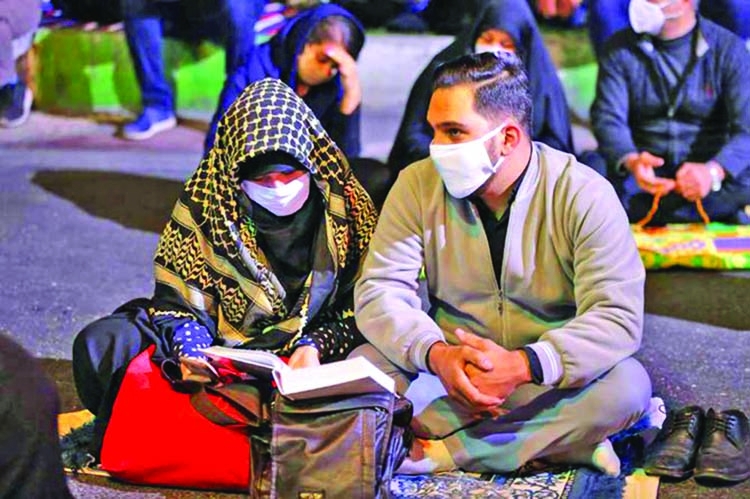 Iranians wearing face masks against the Covid-19 coronavirus attend Laylat al-Qadr prayers outside a mosque in the Tehran on May 13, 2020. -AFP
Large swaths of Iran faced a lethal "second wave" of coronavirus infections on Sunday as the official death toll surged toward 7,000.
The southwestern province of Khuzestan is the new focal point, with the most critical "red" ranking on the country's color-coded risk scale. "Khuzestan is in a critical situation," Health Ministry spokesman Kianoush Jahanpour said, reports Arab News.
Iran stopped publishing provincial figures for the coronavirus last month, but the Health Ministry's latest report on Sunday said there was a "rising trend, or the beginning of a peak" in eight provinces, including Khuzestan. Jahanpour said the COVID-19 illness had claimed a further 51 lives over 24 hours into Sunday.
The ministry raised the overall death toll to 6,988 since Iran announced its first fatalities in the pilgrimage city of Qom in February. The number of infections rose by 1,806 to an official total of 120,198, but experts both inside and outside Iran have voiced skepticism about the official figures, and say the real toll is much higher.
Adding fuel to that speculation, organizers of Iran's annual Quds Day rallies in support of the Palestinians defied President Hassan Rouhani and canceled the events. Rouhani had said on Saturday that the parades would go ahead next Friday with protective measures against the virus, but organizers said on Sunday the rallies could not be held "decently" and would be scrapped, apart from a televised speech by Supreme Leader Ayatollah Ali Khamenei.
As the battle to curb the spread of the virus continued, Saudi Arabia reported 2,736 new cases on Sunday, taking the total to 54,752, and the death toll rose by 10 to 312. Worldwide, the virus has infected about 4.8 million people, and killed nearly 315,000. People in Kuwait and Qatar face fines or imprisonment from Monday if they refuse to wear face masks.
In Kuwait, the penalty is up to three months in jail and a maximum fine of 5,000 dinars ($16,200).  In Qatar, it is up to three years' imprisonment and a maximum fine of 200,000 riyals ($55,000). The six Gulf states have reported more than 137,400 infections and 693 deaths from the virus. Qatar, with a population of less than 3 million, has the second-highest infection count at above 32,600, with 15 deaths.

In Lebanon, the movement restrictions and business closures that have compounded the country's economic crisis will gradually be lifted from Monday, Prime Minister Hassan Diab said. "We realize that continuing the lockdown has serious economic and social repercussions," he said.  "We are trying, as much as we can, to minimize these repercussions."
The prime minister spoke on the last day of a four-day lockdown that went into force on Wednesday night, following a surge in infections. Lebanon has recorded 911 cases of COVID-19, and 26 deaths, but the number of cases spiked late last week, increasing almost five-fold in 10 days.
Before the four-day lockdown, restaurants and cafés had reopened at 30 percent capacity, prayers had resumed at mosques and churches, and many people were back at work. Despite the easing of restrictions, Diab said that authorities would impose quarantines on neighborhoods and regions with high infection rates to stem the spread of the virus.