'This memorabilia is priceless' 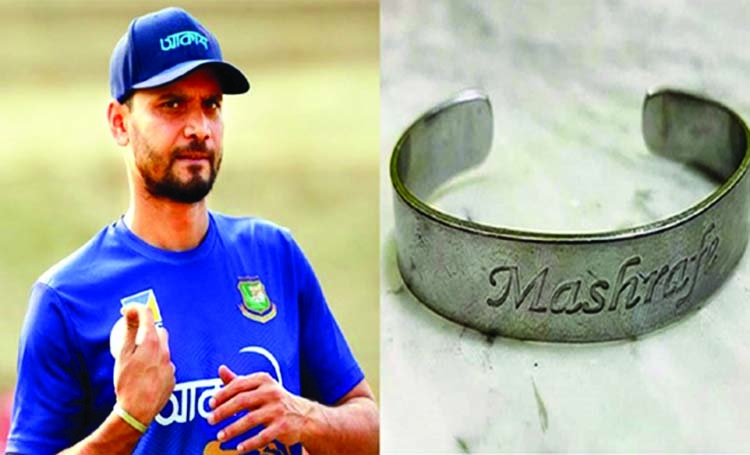 A silver bracelet which Bangladesh all-time best ODI captain Mashrafe possessed for 18 years is not a precious metal. Made of stainless steel, which has been in his right hand for about 18 years. The only exception was the name Mashrafe engraved on it.
Butthis is a legend's bracelet, which the former Bangladesh ODI captain Mashrafe Bin Mortaza termed as his most favourite thing as his 18-year-old bracelet received sky-high honors on Sunday night.
Bangladesh Leasing and Finance Company Association (BLFCA), an association of financial institutions in Bangladesh, bought the historic bracelet of Mashrafe on Sunday night at record breaking Tk 42 lakh in live auction. In a country where the culture of auction is yet to grow up, 42 lakh is definitely a big amount.
Chairman of BLFCA Mominul Islam, who took part in the auction on the behalf of their organizations not only respected Mashrafe's contribution for Bangladesh but also sky-high respected the passion of Mashrafe around that bracelet. He termed Mashrafe's favourite bracelet 'priceless'.
"The honor you have brought to this country is in no way repaid. We have only tried to show you some respect. " Mominul Islam said.
But the climax came when Chairman of BLFCA Mominul Islam said the bracelet would be returned to Mashrafe as a 'gift' from their organization through a formal ceremony. Mashrafe however did not skimp on generosity. He immediately informed that he would keep it open till then.
'We bought the bracelet for 40 lakh. But, we will pay Tk 42 lakh adding five percent more to the principal amount. However, we would like to gift Mashrafe's bracelet to him again. The bracelet of our favorite captain will be with him. If the situation turns normal, we will hand over the bracelet to Mashrafe through a formal ceremony." "Chairman of BLFCA Mominul Islam said.
Surprised and emotional Mashrafe however thanked Mominul Islam after the announcement. Mashrafe said, "Thank you Momin Bhai, Thank you very much, I have no pain if you take the bracelet, however, I honour and respect your decision and finally thank you all."
Facebook live 'Auction 4 Action' started the auction of the bracelet with fixing base price Tk. 5 lakh on May 16 and ran till May 17 after which the winner was declared on Sunday night. The highest bid crossed Tk. 13 lakh till 10.00 pm on Sunday night before BLFCA stunned everyone by buying the bracelet with sky-high price.
As the novel coronavirus wreaks havoc across the world, cricketers around the world have been doing their bit in the fight against the pandemic putting up their respective equipments for auction.
Bangladesh superstars like Shakib Al Hasan, Mushfiqur Rahim, Soumya Sarkar have also auctioned their bats. Everyone has the same goal, to help the people affected by the Corona. Bangladesh world Cup-winning youth team Captain Akbar Ali also has recently put the jersey and batting gloves which he used against India in the U-19 World Cup final up for live auction.
A Bangladeshi living in the United States recently bought his jersey and gloves with the price of USD 2,000 while Pakistan superstar Shahid Afridi, former Pakistan captain bought Mushfiqur's first double hundred bat for Rs 1.7 million. Bangladesh top all-rounder Shakib Al Hasan's World Cup bat was sold for Tk 20 lakh.