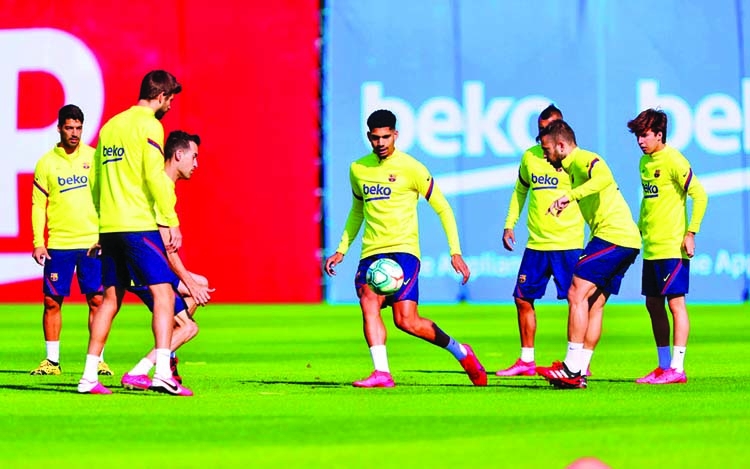 Barcelona football team in action during group training on Monday in Barcelona, Spain. -Twitter
Spanish clubs began training in groups of 10 players on Monday, in line with health protocols, as La Liga takes another step towards the planned resumption of the coronavirus-hit season next month.
Barcelona confirmed that their squad was back on the training ground at 9:30am (0730 GMT), with pictures published on their Twitter account showing several players including Gerard Pique and Sergio Busquets taking part in the session.
Real Madrid players also trained at the club's base on the outskirts of the Spanish capital, as clubs begin the last step towards being able to work with their full squads together.
Spanish government protocol allows training sessions to be expanded by all clubs, even those belonging to areas that are further behind in the country's programme of de-escalation from a strict lockdown. That means teams like Real, Barcelona and Aletico Madrid are able to train in groups of 10, despite both Madrid and Catalonia remaining in 'phase 0' as two of Spain's worst-hit regions.
Spain has been one of the world's hardest-hit countries by COVID-19 with a total of 27,650 reported deaths as of Sunday, and more than 231,000 confirmed cases. "It is a ministerial decision. It was very important that all teams could train in the same way," said Javier Tebas, the president of La Liga, on Sunday.
Tebas reiterated La Liga's desire to finish the remaining 11 rounds of matches in a season that has been suspended since mid-March. He has circled June 12 as the ideal date for matches to return but admitted the exact timing will depend on the health authorities in Spain and the trajectory of the virus.
"We are working so that (the return of La Liga) will take place from June 11-12, but we are working to be ready regardless of the date," Tebas told Movistar TV. "It is the health authorities who will say when we start.
"I would like it to happen as soon as possible, but the truth is that we do not have an ideal date. We have to wait for the green light from the health authorities."
According to an official statement by the government on Saturday, professional sports clubs "may carry out complete training sessions" while "complying with the corresponding prevention and hygiene measures". The statement put the maximum number at 14 for group training but La Liga informed clubs the limit would be 10 on Monday.
Tebas has estimated that failing to complete the season would cost clubs around 1 billion euros ($1.08 billion).
--- AFP, Madrid