'Federer is the best but Nadal tougher for Rafa' 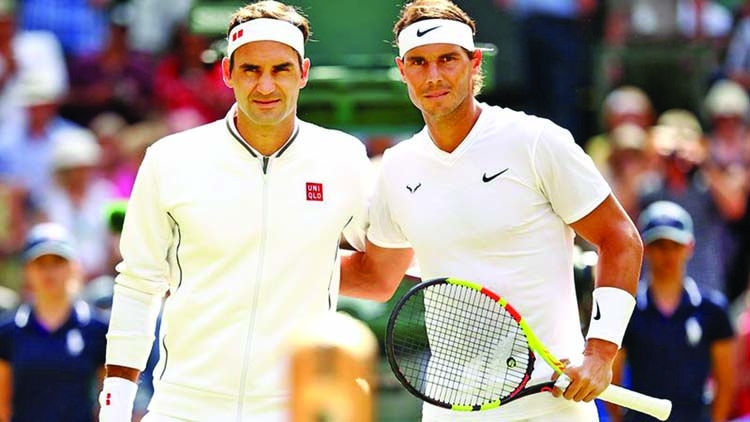 Roger Federer and Rafael Nadal at Wimbledon. -Getty
Roger Federer is the best tennis player of the current generation but reigning world number one Novak Djokovic remains the most difficult opponent in Rafa Nadal's career, the Spaniard's uncle and former coach Toni Nadal has said.
The "GOAT" (Greatest of all Time) debate in men's tennis has divided opinion for a decade and remains a hot topic as the trio continue to dominate, having won the last 13 majors.
Federer, who will be 39 in August, is nearing the end of a glittering career and leads the race on 20 Grand Slam singles titles, with Spaniard Nadal close on his heels with 19. Djokovic is three behind the Swiss with 17 majors and is a year younger than Nadal, who turns 34 next month.
"For me, he (Federer) is a wonderful player. I like to watch Roger Federer a lot," Toni told Eurosport's Players' Cut programme, which features Nadal this week. "If I wasn't the uncle nor the coach of Rafael, I would want Federer to win all the matches. But at the end, I like how he plays, because he's very elegant but he's very effective too.
"I know Federer is the best ever with I don't know who; maybe Rod Laver or maybe Rafael, he's not too far (behind). But at the moment Federer is the best."
Djokovic looked unstoppable this season before the novel coronavirus pandemic brought the tennis circuit to a halt in early March. He lifted the ATP Cup with Serbia, won an eighth Australian Open title and then completed a fifth triumph at the Dubai Tennis Championships, extending his unbeaten run to 21 matches. The Serb has a slight edge on world number two Nadal, having won 29 of their 55 career meetings so far. "For us it was always more difficult to play against Djokovic," Toni said.
"Because it's not about who of them is better. For us, when we play against Federer, we have a way to beat him. In my mind, before going on court, I know what we have to do. "When we play against Djokovic, many times we didn't know exactly what we had to do. This is more difficult, for me. I prefer to play against Federer."
Nadal currently trains under former world number one and fellow Mallorcan Carlos Moya after uncle Toni stepped down as his long-time coach at the end of the 2017 season.
--- Reuters