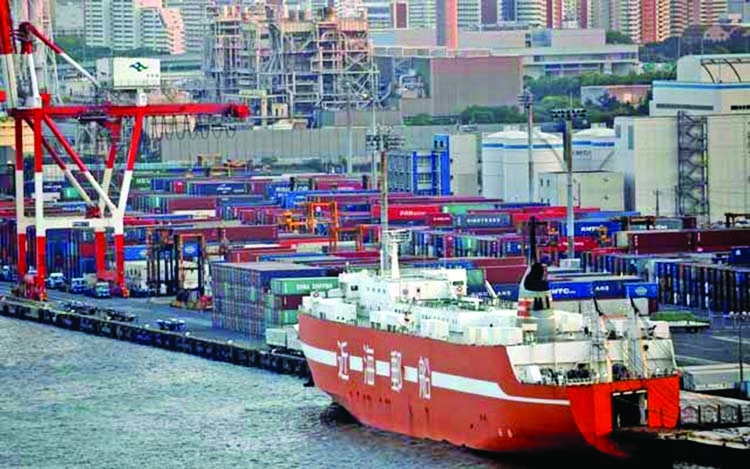 An industrial port is pictured in Tokyo, Japan, May 23, 2019. -Reuters
Japan fell into a recession for the first time since 2015, as its already weakened economy was dragged down by the coronavirus' effect on businesses at home and abroad.
The world's third-largest economy after the United States and China shrank by an annualized rate of 3.4% in the first three months of the year, the country's government said Monday.
That makes it the largest economy to officially enter a recession, often defined as two consecutive quarters of negative growth. Other major economies around the world are set to follow, joining Japan as well as Germany and France in recession, as efforts to contain the outbreak ripple around the globe. The experiences of China, where the outbreak first emerged in December and January, suggest recovery will be long and difficult.
Japan will find it no easier. Initial figures for the April-to-June period show its economy will be slammed by efforts to contain the outbreak.
"The economy entered the coronavirus shock in a very weak position," said Izumi Devalier, chief Japan economist at Bank of America Merrill Lynch, but "the real big ugly stuff is going to happen in the April, June print. It's going to be three quarters of very negative growth." Devalier added, "It's not a very encouraging picture."
The virus outbreak crushed Japan's exports, forced it to postpone the Olympics and then put the country on a soft lockdown as it joined other nations scrambling to stop the coronavirus.
The efforts seem to have paid off. Cases rose briefly before receding. The country's health system never became overwhelmed. The total number of deaths attributed to the outbreak was under 750 as of Sunday, far lower than in other major developed nations.
April may prove to be the economic nadir.
On Friday, Abe announced he was lifting the state of emergency on all but eight of the country's prefectures earlier than initially expected - a move that could give the economy a boost. The government will decide on next steps for the remaining areas, which include the economic powerhouses Tokyo and Osaka, within the month.