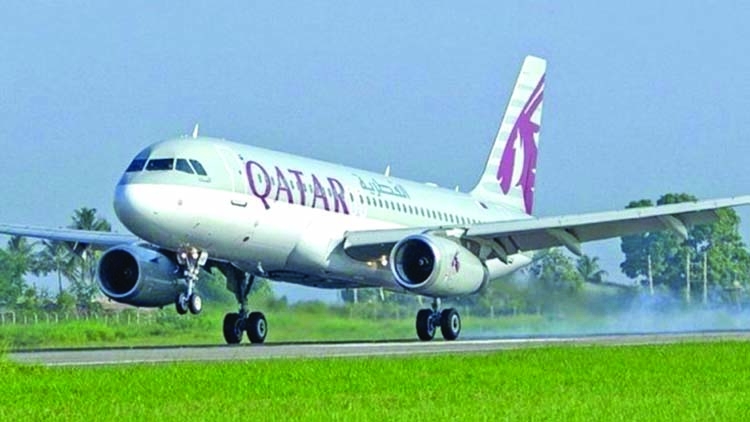 Qatar Airways. Photo: Agency
More than 350 Canadian citizens and permanent residents stranded in Dhaka amid flight suspension due to COVID-19 pandemic left here for Toronto by a special chartered flight of Qatar Airways.
"The fourth and final special flight arranged by the Canadian High Commission departed Dhaka for Toronto via Doha today, bringing home more than 350 stranded Canadians citizens and permanent residents," said a Canadian High Commission press release on Monday. The release said the four chartered flights have allowed over 1110 stranded Canadians to return home from Bangladesh so far, with all passengers agreeing to pay or reimburse their tickets.
Canadian High Commissioner to Bangladesh Benoit Prefontaine, said his country is grateful to all Bangladesh government authorities involved as well as Qatar Airways for their continued support.
The High Commission recommends that Canadians remaining in Bangladesh register in the online Registry of Canadians Abroad and follow it on social media to receive important information, said the release.
on the other hand, a C-130B transport aircraft of Bangladesh Air Force returned to Bangladesh from the Maldives on Sunday with 70 Bangladeshi nationals residing there as they became jobless in the novel coronavirus situation.
The mission consisting of a 19 BAF air crew was led by Air Commodore M A Awal Hossain of Bangladesh Air Force, said an ISPR press release Monday.
In compliance with the policies published by the Government, Bangladesh Armed Forces is conducting various activities under the direction of Prime Minister Sheikh Hasina to prevent coronavirus.
In line with this, a C-130B transport aircraft of Bangladesh Air Force transported 70 jobless Bangladeshi expatriates from Male to Dhaka.
All these expatriate Bangladeshi people were living legally in the Maldives. It has been possible to bring them back to the country at the request of the expatriate Bangladeshi people and with the earnest support of the Maldives government.