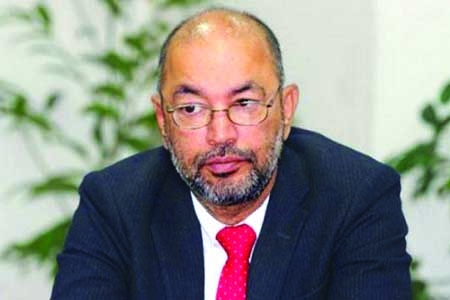 State Minister for Disaster Management and Relief Dr Md Enamur Rahman on Monday said the government has taken all-out preparations to deal with the cyclone 'Amphan'.
"About 12,078 cyclone shelter centres have already been prepared in the coastal districts," he told a virtual press briefing on cyclone preparedness at his secretariat office in the city, reports BSS. Enamur said 31 metric tons of rice, Taka 50 lakh in cash, Taka 31 lakh for baby food, Taka 28 lakh for cattle feed and 42,000 packets of dry food items were sent to 19 coastal districts.
He said the authorities have already started evacuation of people in Satkhira district and taken them to the cyclone shelter centers.
Shifting of people to cyclone centers in other coastal districts will begin tomorrow morning, the state minister said.
Noting that all necessary measures have been taken so that people do not face any problem in the cyclone centers, he said, adding that adequate allocation has been given to every district as per the demand of district administrations.
Disaster Management and Relief Ministry senior secretary Shah Kamal was present.
Earlier, Enamur joined a virtual meeting with secretaries of different ministries and deputy commissions of coastal districts on cyclone preparedness.