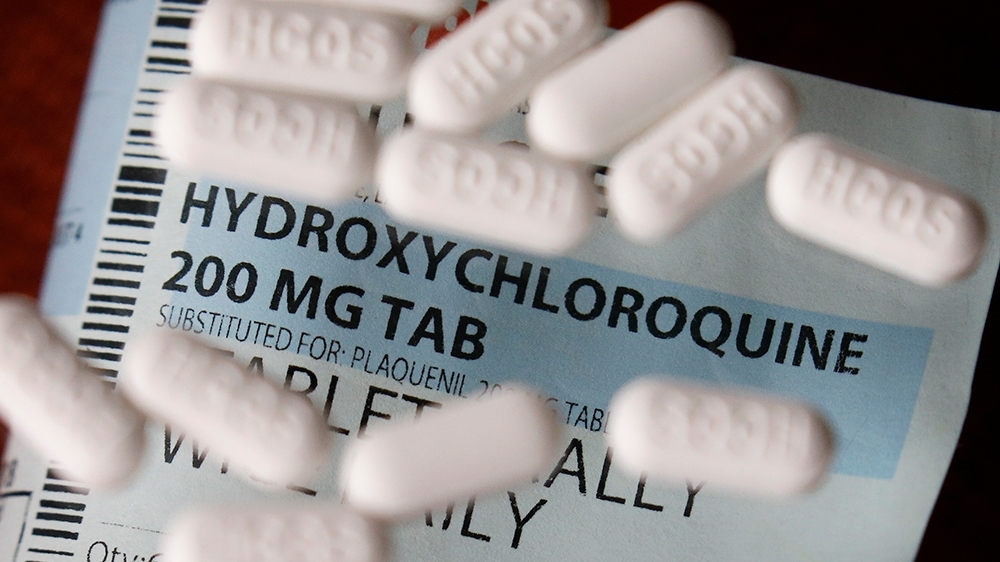 US President Donald Trump has said he is taking hydroxychloroquine to ward off coronavirus, even though health officials have warned it may be unsafe.
Speaking at the White House, he told reporters he started taking the malaria and lupus medication recently.
"I'm taking it for about a week and a half now and I'm still here, I'm still here," was his surprise announcement.
There is no evidence hydroxychloroquine can fight off coronavirus, though clinical trials are under way.
What did Trump say?
The 73-year-old president was hosting a meeting devoted to the struggling restaurant industry on Monday, when he caught reporters unawares by revealing he was taking the drug.
"You'd be surprised at how many people are taking it, especially the frontline workers before you catch it, the frontline workers, many, many are taking it," he told reporters. "I happen to be taking it."
Asked what was his evidence of hydroxychloroquine's positive benefits, Mr Trump said: "Here's my evidence: I get a lot of positive calls about it."
He added: "I've heard a lot of good stories [about hydroxychloroquine] and if it's not good, I'll tell you right I'm not going to get hurt by it."
Though some people in the White House have tested positive for coronavirus, the president said again on Monday he had "zero symptoms" and was being tested frequently.
He added that he has been taking a daily zinc supplement and received a single dose of azithromycin, an antibiotic meant to prevent infection.
When asked whether the White House physician had recommended he start taking the disputed remedy, Mr Trump said he himself had requested it.
Dr Sean Conley, physician to the president, said in a statement issued through the White House later on Monday that Mr Trump was in "very good health" and "symptom-free".
The US Navy officer added: "After numerous discussions he and I had regarding the evidence for and against the use of hydroxychloroquine, we concluded the potential benefit from treatment outweighed the relative risks."
What have US health officials said?
The US Food and Drug Administration (FDA) last month issued an advisory saying that hydroxychloroquine has "not been shown to be safe and effective".
It cited reports that the drug can cause serious heart rhythm problems in Covid-19 patients.
The FDA warned against use of the medication outside hospitals, where the agency has granted temporary authorisation for its use in some cases.
The Centers for Disease Control (CDC) says there are no approved drugs or therapeutics to prevent or treat Covid-19, which is confirmed to have infected more than 1.5 million people in the US, killing over 90,000 patients.
What else did Trump say?
Dismissing reports of severe side effects from hydroxychloroquine, the president said: "All I can tell you is, so far I seem to be OK."
He said the "only negative" he had heard was from a "very unscientific report" conducted by "people that aren't big Trump fans".
Mr Trump was apparently referring to a preliminary study from April of Covid-19 patients in US government-run hospitals for military veterans that suggested hydroxychloroquine had no benefit and may have even caused a greater rate of deaths.
"I get a lot of tremendously positive news on the hydroxy," the president told reporters, adding: "What do you have to lose?"
According to doctors, the drug has the potential to cause symptoms including heart failure, suicidal thoughts and signs of liver disease.
What have other medical experts said?
Two recent studies, each involving around 1,400 Covid-19 patients in New York, did not find any benefits from hydroxychloroquine.
Another study by French researchers involved 84 hospital patients taking the drug and 97 others who received standard care. It concluded hydroxychloroquine had no impact for better or worse.
Last month, the American Medical Association, American Pharmacists Association and American Society of Health-System Pharmacists issued a joint statement opposing the use of hydroxychloroquine for Covid-19 prevention.
Also in April, the former director of a federal vaccine agency claimed in a whistleblower complaint that he was removed for refusing to promote the drug.
The health department has rejected Dr Rick Bright's complaint, and the president has called him a "disgruntled" employee.