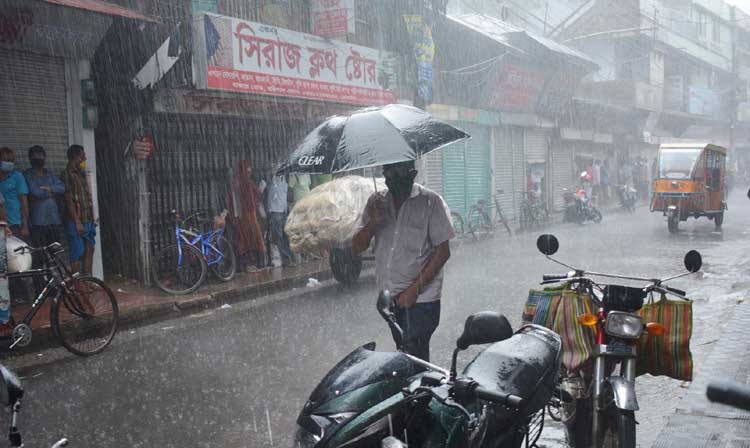 Locals of Barishal experiencing heavy rainfall as the track of cyclone is almost at the doorstep of coastal areas. Officials already put alert and warn everyone to take necessary steps to secure themselves. -AA
Evacuation of people at coastal and remote shoal areas of Barishal division has been started from Tuesday for sheltering them in safe places  to avoid the  effect of upcoming cyclone 'Amphan'.
Mohammad Masud Alam Siddique, deputy commissioner Bhola, said they planned  to evacuate at least 500,000 people from different localities of coastal and shoal areas to 1,104 shelters of Bhola district. District and upazila administration already sent 50 trawlers to remote Dhalchar and other shoal areas of the district to  evacuate at least 10 thousand people and evacuation has been started from Tuesday morning,  he confirmed.
Bipul Chandra Das, upazila nirbahi officer (UNO) of  coastal Monpura upazila of Bhola, said two trawlers have been sent to Mahajankandi shoal area of the upazila to evacuate hundreds of  people to the mainland.
However he said people did not want to  go to cyclone shelter so quickly as weather condition yet not deteriorated to severe stage.
Pijus Chandra Dey, UNO of Mehendiganj upazil under Barishal district, informed that the union parshad chairmen of Meghna River banks and remote shoals have already been instructed to start evacuating people from the remote risky char area of the upazila and sheltering them to cyclone shelters. SM Ajiar Rahman,deputy commissioner Barishal informed that the danger signal number  still at 6 in the district and it may may increase any time. District administration preparing to face any worse condition of weather may be created by upcoming cyclone `Amphan'. The evacuation  people from remote char areas of the district  would begin at  afternoon.
The DC Barishal said they planned to evacuate 2,39,000 people in 1,049 cyclone shelters of  the district. Abdur Rashid, deputy director of Cyclone Preparedness Program (CPP), Barishal said that 25,005 volunteers are ready in the Barisal division to help the district and upazila administration to help evacuation of people. CPP  already started awareness raising propagation and cutions about weather signals, he added. Syed Azizul Haque, Barishal divisional director of the fisheries department, they has instructed  all fishing boats trawlers  to take safe shelters.

However fishing in sea would be under regular restrictions for 65 days from early Wednesday May 20, he told.

Muhammad Yamin Chowdhury, Barishal divisional commissioner,  at least 20 to 25 lakh people will be evacuated from risk-prone areas to 4,982 cyclone shelters of the Barishal Division.

Divisional authourity has asked local administration to  evacuate the people of risk-prone areas within  Tuesday.

According to the divisional commissioner the authourities asked to maintain social distancing in the cyclone shelters.

In cyclone shelters, people will have to maintain    social distance and use hand washing and hand sanitizing items provided there by the concerned local administration.
--- Masuk Kamal, Barishal