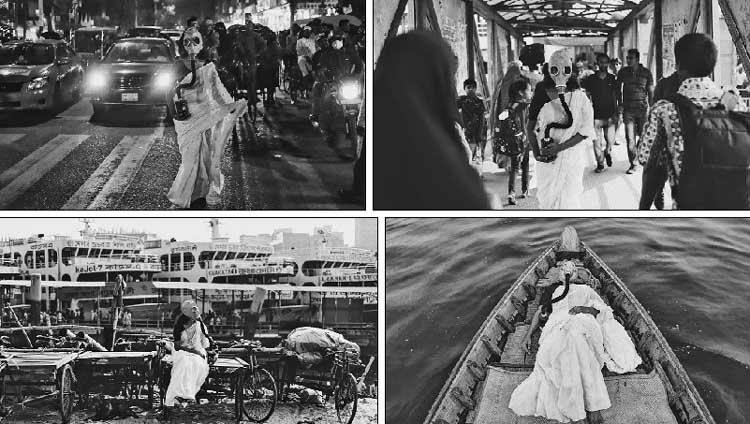 Amid the hustle-bustle of the Sadarghat area, a woman stands there helplessly to save herself from the deadly virus and air pollution by wearing a gas mask.
This is a black and white photo from the series, "The Epidemic" by Bangladeshi photographer, musician and a marketing professional AvishekBhattacharjee.
On April 29, the photo series got featured on VICE Asia. Avishek published the album on his Facebook profile towards the end of February. The album started making rounds on the social media platform instantly.
Avishek took the photos before Coronavirus had hit the country and there was no shutdown at that time.
Avishek said, "The idea came to my mind in 2018 for the air pollution that exists in our city, especially due to the on-going construction works of the metro rail across the city. I could not find the perfect mask I needed for this photoshoot back then."
The series has a total number of 16 photos.  When Avishek was asked how VICE Asia found the album, he replied, "The album went viral on social media and a VICE Asia staff messaged me. After talking to me for permission they published the photo story in 2 or 3 days."
The gas or oxygen mask is an important prop that has been used in the photo story. "It was little difficult to find the right mask. Finally, last year, in November I found the mask online randomly and I bought it," recalled Avishek.
"Right after getting the mask I felt like 60% of my work was done," he added.
"When the pandemic broke out in many countries in the world but had not hit Dhaka yet, all I could think of when this pandemic would hit this highly polluted city, what would happen to us? I tried to depict that reality through my photo story."
"Finally, at the end of February, I called my friend Nayeema spontaneously and two of us roamed around various places of Dhaka city including Ramna Park, TSC, Karwan Bazaar, Buriganga River, Old Dhaka and Nilkhet in one day and took those photos."