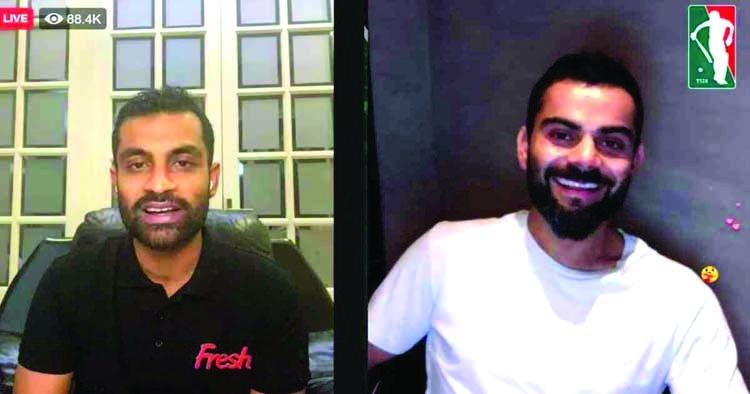 Bangladesh ODI captain Tamim Iqbal and Indian captain Virat Kohli joined in the live Facebook chat. After Rohit Sharma, Virat was the second Indian cricket star to join Tamim in this show. -Collected
From a good cricketer to the world's best-India skipper Virat Kohli's cricketing journey was always inspiring for many. The only batsman in the planet, having an average of more than 50 in all format of cricket time, again attributed the meteoric success down to his right diet and disciplined training.
As he was invited as the guest of 'Tamim Iqbal's Live Show' the Indian skipper again emphasized on right diet and consistent training, which, he thought, could make a revolution in any cricketer's career. Kohli who is now the top of ICC ODI rankings, second in Test rankings and 10th in T20 rankings, was the second Indian to grace Tamim Iqbal's show after Rohit Sharma. "If you go to field, being a fit and enormous training behind you, it will give you the psychological edge.
It can't ensure that every time, you go the field, you will end up, scoring a century but you remain confident of your chance always," he said during the session, that was aired on Tamim's facebook page and Youtube Channel on Monday night.  "Right diet is key to your fitness. If you keep yourself fit, take right diet and don't compromise with you." Kohli is however the burning example of how a person could avoid all kind of mouthwatering food for the sake of fitness.
Virat Kohli, who helped India win the 2008 Under-19 World Cup, was just a good batsman during his early days in international cricket in 2009.

He accumulated runs in good pace but it was 2014 when his failure in English condition prompted critics lashing him at out, saying 'He is just an average batsman.'
Desperate to be the best of the world, Kohli then made a dramatic change in his diet and fitness session. In a word, he became fitness freak and reaped the rewards immediately.
In Australian condition, he scored nearly 700 runs in a four-match Test series before making runs in all places of the world. He then returned to England for another Test series, which was termed as the 'Last Frontier' for him to prove him the best of the world. And he passed with distinction.
In a condition, that was touted as the toughest, the England has ever seen, Kohli scored more than 500 runs even though India lost the series. However no other batsman in any team could score more than 330 runs-a testament of how tougher the wicket was.
When Tamim reminded that, Kohli said: "You can have doubt on you whether you can be successful in International cricket, which is always tougher for a player. I was out of the team after a few matches at the start of my career. I got another opportunity in 2009. My confidence had started to build up right then. When I had hit the first century against Sri Lanka I started to believe that I can do it for a longer period of time."
"I struggled still. But at some point, I felt I need to do something more. So the diet and fitness regime was changed completely," he concluded.