The construction of Diamer Bhasha Dam: A new controversy at hand 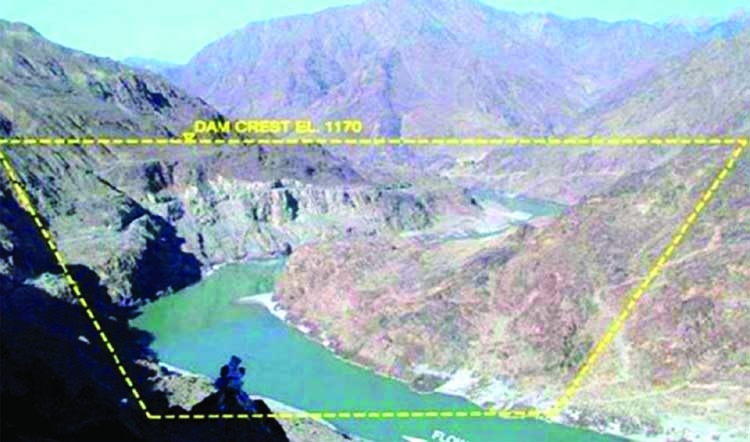 The PTI federal government has almost acquired notoriety in kick starting controversies. It has already weathered many a controversy since it assumed power in August 2018. The dispute raised by the hasty notification for the extension of the tenure of the Chief of Army had hardly settled that a tense political commotion between the federal regime and the provincial administration of Sindh was stirred by the ill timed and ill argued statements of Federal Ministers from Karachi against the 18th Amendment. At the heel of this discussion has followed the controversial twitter message of General (Retired) Asim Bajwa regarding the Diamer Bhasha Dam. The massive trend on twitter may have now given him an idea of the sensitivity of the construction of any dam upstream on Indus River.
There have been reports that Rs. 115billion was distributed for the land acquisition for the project by the first quarter of the current year. Lately, the government signed Rs.442billion contract with a joint venture of China Power and FWO for the construction of the dam. All these steps towards the implementation of the project went unnoticed. Nevertheless, the message of the Special Assistant of the Prime Minister, Mr. Bajwa has stirred the hornet's nest in Sindh stimulating thousands of tweets from political workers, nationalists, water experts and citizens of the province questioning the feasibility, tenability and profitability of the Dam. Their arguments against the project cannot be brushed aside conveniently.
Dams are constructed on rivers for storing water and generating electricity. This was one of the significant trends among the water experts from the early 1950s to the late 1990s when a new discussion on the advantages and disadvantages of dams came to occupy the water experts, ecologists and environmentalists and we came to have equally forceful arguments in favour of and against dams. Almost a consensus emerged from these discussions that the construction of dams should be undertaken in extreme necessity to minimize the human molestation of the nature.
The construction of a dam may be undertaken when 1) there is surplus water in a river and it goes unutilized; 2) the project is financially and technically and environmentally feasible; 3) it is cost effective; 4) it not apprehended to cause loss to any genuine stakeholder. Let us examine the Diamer Bhasha Dam project on the touchstone of these standard principles. There is no surplus water in the Indus River System. There has been shortage of water in both Khareef and Rabi seasons in Sindh and Balochistan.
Last year, the shortage was terribly acute particularly for the fertile lands at the tail of canals and distributaries. Almost entire upper Sindh had late Khareef and Rabi and poor harvests. No minimally required sweet water downstream Kotri flows into the Sea. This has resulted into the gradual intrusion of Sea into the coastal lands of Thatha, Sijawal and Badin. Since the commissioning of Tarbella Dam, the Sea has already swallowed 3.5 million acres of cultivable land in these three districts. The Delta of Sindh - the only one of Pakistan - is losing the mangrove forest, fertility and marine life.
Renowned engineers have serious technical reservations to the construction of the dam. They say, the site of the dam lies at the boundary between the Indian and Eurasian plates and is traversed by fault lines and will be prone to earthquakes. The Dam will be one of the highest concrete filled dams with a height of 922 feet. A concrete filled dam anywhere in the world higher than 620 feet remains vulnerable to such tremors, cracks and leakage.
The project is estimated to cost slightly over $14billion. As it has happened in all the big projects in Pakistan, the cost of the dam will escalate by 98% reaching $28billion by the time its construction is completed. This will be an unbearable drain on Pakistan's GDP of around $320 billion. Our past record supports this argument. The Neelum-Jhelum cost overrun was 500%. The Nandipur, the Jinnah Solar Park in Bahawalpur and some other mega projects were also marred by exorbitant cost escalations.
Sindh originally had no objections to the construction of the Bhasha Dam because no canals could be extracted, and that in the scarcity of water due to natural reasons, the water stored in the dam will be discharged in River Indus. However, Sindhis have lately developed a second thought about the Dam. They argue: 1) dams do not generate water. Their reservoirs are filled with the water available in rivers.
There is already acute shortage of water in the Indus causing draught in the riparian province and Balochistan; 2) the water accords signed in 1992 were never implemented by the federal authority and adhered to by Punjab; 3) Chashma Jhelum and Taunsa canals are flood canals and should have been treated as such but are run as perennial canals to the ridicule of the system; 4) Loss of water due to evaporation etc was to be distributed equally on all provinces. Later, Balochistan and KPK, in connivance with Punjab, were exonerated; 5) Tele system to monitor the availability, reliability and flow of water remained out of order for most time.
Failure of the Indus River System Authority (IRSA):
The IRSA was original composed by one representative from each province. This was later changed and a federal representative was appointed to it to be always nominated from Sindh. This practice was abandoned within years to give Punjab an upper hand in decision making within IRSA with the backing of the federal bureaucracy and WAPDA officials.
The representatives of KPK and Balochistan have unusually backed Punjab and the Federation in all the cardinal decisions. The culpability of IRSA in not implementing the water accords in letter and spirit or letting itself to be ridden roughshod by the Punjab representative is really regrettable which has deepened the distrust between Sindh and Punjab. The way forward is a consensus-based decision in CCI within the spirit of federalism.