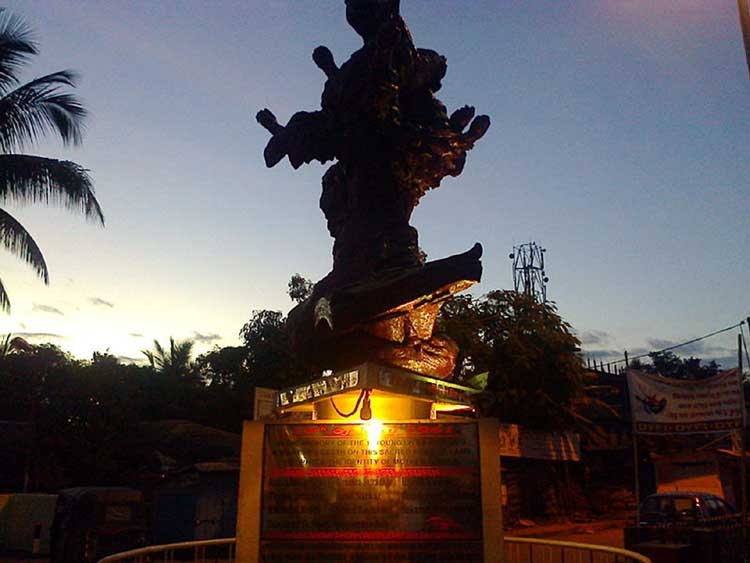 Language Martyr's Memorial at Silchar railway station.
While our subcontinent was being partitioned in 1947 a referendum was held in the Surma/Barak valley region. Yields of that referendum brought Surma valley (our greater Sylhet area) to Bangladesh (the then East Pakistan) and Barak valley (Cachar,Karimgonj, Shilchar, Hailakandi) went to Assam. Mother tongue of all these people is Bangla (of course local dialects prevail).
Both these people had a common and glorious history of fighting and laying their lives for own mother language. People of Surma valley fought with all other compatriots to establish Bangla as one of the State languages in the then Pakistan. Martyrs of 21st February and the consequent people's movement compelled tyrant Pakistanis to accept our just demand. Amar Ekushey has become our pride and is now being acclaimed by the whole world after its recognition as International Mother Language Day.
Now let me put some light on similar struggle on the other part of story. Barak valley became part of Assam and Assamese (Ahomia) language was declared as the only state language there. Barak valley constitutes a large part of Assam and its population is also a considerable part of Assam's numbers. People in the valley raised their voice for recognition of their mother tongue. Our success in 1952 must have inspired them too. Their movement continued and culminated in a climax on 19 May 1961 when striking students and youth were confronted by a contingent of Assam Rifles near Shilchar Rail station. 11 youth including 17year old Kamala Bhattacharjee laid their lives.
Repercussions were widespread. Barak valley was on fire. The Assam state recognised Bangla as the second state language promptly after the bloodshed and second time in history Bangalees laid their lives for recognition of their language. Kamala was the first lady Martyr ever for Mother language. Our tributes and Salute to Kamala, her 10 other co fighter Shaheeds, to our Rafiq, Jabbar,Salam, Barkat, Shafiur and also to Shaheed Sudeshna Singha, a Manipuri youth who sacrificed her life for the recognition of Bishnupriya language as a state language of Manipur state besides Meitei.
Amtala gate of Dhaka University (now a part of Dhaka Medical College Hospital) went into the annals of Bangladesh history since 21 February 1952.Students came out of the campus defying section 144 to press for their just demand of recognition of their language. Unfortunately they did not receive proper support and backing from political parties. Nevertheless some political leaders including Sheikh Mujibur Rahman, Dhirendra Nath Dutta, Tamijuddin Khan, Shamsul Haque and a few others came to their support. Since section 144 was defied, Chief Minister Nurul Amin's government ordered police firing. For the first time in the history of mankind lives were laid for recognition of mother tongue. Bangalees proved their braveness and might. Rest is history. Bangla had to be recognised as one of the state languages of Pakistan.
The fate of Barak valley youth fighting for similar cause was no different. They did not get much of political support either. Still they carried on. They at least had an example of successful struggle for the same reason which was crowned with success. What finally happened has been narrated earlier. It will be worthwhile to mention here that families of 10 of the Shaheed Shilchar youth went to settle in Kachhar during the partition of Info Pak subcontinent. So, we can safely call them to be our children. All of them were under the age of 21.
Towards the end of my write-up I intend to draw the attention of the readers to a very interesting fact to which I have close access fortunately. Most of us do not know much about how 21 February became the International Mother Language Day. Well nothing happens just like that. Here comes into picture mainly two Bangladeshis of my age and belonging to my friend circle living in Vancouver, BC, Canada.
It was Rafiq first who being a freedom fighter from Cumillah who wrote a letter to the then Secretary General of UN Mr Kofi Amman requesting for declaration of a special day for all mother languages of the world, because many were going extinct for various reasons. Rafiq proposed in 1998 to declare our 21February as that special day taking queue from various such days of the year being observed as International Women's Day, International Labours Day, and so on. He received a prompt reply that an individual cannot handle such issue and also it has to be addressed to UNESCO.
Immediately in Vancouver an organisation was formed with like minded people to carry on with the fight. It had members from different Nationalities, was led by Rafiq and Salam (from Chattogram), Hafizur Jahangir, my friend for last 50 years and other friends from different countries became their associates. It was named as MLLW (Mother Language Lovers of the World).A well drafted letter by Salam signed by 10 enlightened persons belonging to 8 nationalities were sent to UNESCO Headquarters in Paris. To emphasize on mother language the letter was signed in as many as eight different languages.
Unfortunately, they again met a roadblock. As, being a UN organisation UNESCO could deal with only Governments and no private organisation.
So, the committee led by Rafiq and Salam took it up with Bangladesh Government and not surprisingly our  then Education Minister Mr Sadeque and our glorious Prime Minister Sheikh Hasina took extraordinary intuitive to raise the issue in the 1999 plenary session of UNESCO and got it approved. So, since 21 February 2000 the world is observing International Mother Language Day. Motto is all languages are to be respected and valued. No language should henceforth be allowed to disappear due to lack of patronage. Beauty is in the diversity.
Our Rafiqul Islam was honoured with Swadhinata Padak and MLLW got an Ekushey.
We again pay our deep respect to all Bhasha Shaheeds of Dhaka, Shilchar and elsewhere.


The writer is a researcher of
history and culture