It may inundate 14 dists, 2.2mn people to be evacuated 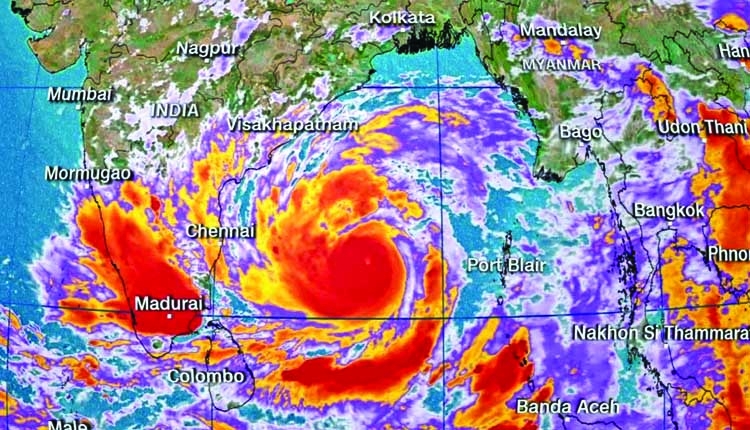 The super cyclone 'Amphan' is approaching Bangladesh's coast and is likely to make landfall at 6pm on Wednesday (today). It may inundate parts of 14 districts of the country, said Bangladesh Meteorology Department.
''Amphan might get into Bangladesh's coast at 6 in the morning on Wednesday and make landfall at 6pm,'' said State Minister for Disaster Management and Relief Dr Enamur Rahman through an online press conference on Tuesday.
Met Office in its latest weather update on Tuesday said,  ''The cyclone may cross Bangladesh coast between Khulna and Chattogram Wednesday afternoon or evening as it is intensifying with sustained wind speed of up to 220 km per hour.''
According to the latest special bulletin of the Met Office, the cyclonic storm was 665 km south-southwest off Payra port and 785 km southwest off Chattogram port till 3:00 pm on Tuesday. The low-lying areas of 14 coastal districts including Patuakhali,  Satkhira, Khulna and Bhola are likely to be flooded by additional 5-10 feet high waves.
Other districts are: Pirojpur, Jhalakathi, Bagherhat, Borguna, Barishal, Lakshmipur, Chandpur, Noakhali, Feni, Chattogram and their offshore islands and shoals.
Meanwhile, Bangladesh government has taken all-out efforts to save the people of the coastal areas. As part of the measures, it began moving almost 2.2 million people to cyclone shelters to ward off casualties.
State Minister for Disaster Management and Relief Dr Enamur Rahman said, ''People who are at risk in the coastal districts, will be evacuated to safer places by 8pm Tuesday. Cyclonic storm alerts will be raised to the maximum level at 6am on Wednesday,'' he added.
The minister has called upon all to wear face masks and maintain physical distance upon arriving at the storm shelters.
"A total of 12,078 cyclone shelters have been prepared in the coastal regions which have the capacity to house more than 5.1 million people,'' said the State Minister for Disaster Management and Relief.
The government has also formed a medical team to supply urgent medicine while Navy and army personnel are working to evacuate people from low-lying areas.
Met Office has advised all fishing boats and trawlers to take shelter immediately and remain there until further notice.
The storm was hurtling towards the coast packing speeds of about 200 kph rising to 220 kph in gusts or squalls within 85 km of its centre.  The sea will remain very high near the cyclone's centre.
Weather experts said, the cyclonic storm Amphan might gain energy like that of Sidr.
The Met Office has issued danger signal number 7 for the maritime ports of Mongla and Payra and danger signal number 6 for Chattogram and Cox's Bazar.
The Bangladesh Inland Water Transport Corporation (BIWTC) on Tuesday suspended ferry services on different routes due to super cyclonic storm Amphan.
The ferry services on Paturia-Daulatdia, Shimulia-Kathalbari, Chandur-Shariatpur, Bhola-Laxmipur andBedhuria-Laharhat will remain halted until further notice.
According to data from the US Joint Typhoon Warning Center, super cyclone Amphan became the strongest storm ever recorded in the Bay of Bengal, after intensifying with sustained wind speeds of up to 270 kilometers per hour.
However, the storm has weakened slightly since, but the storm is still the equivalent of a strong Category 4 Atlantic hurricane, or a super typhoon in the West Pacific, with winds speeds up to 240 kph, reports CNN,The Bay of Bengal, in the northeastern part of the Indian Ocean, is positioned between India to the west and northwest, Bangladesh to the north, and Myanmar to the east.
Indian officials said that up to 300,000 people in the coastal areas of West Bengal and Odisha are in immediate danger from the storm. Evacuations are underway in the region, according to the country's ministry of home affairs.
Indian Prime Minister Narendra Modi has reviewed the country's emergency response measures in an effort to save the people from the storm.