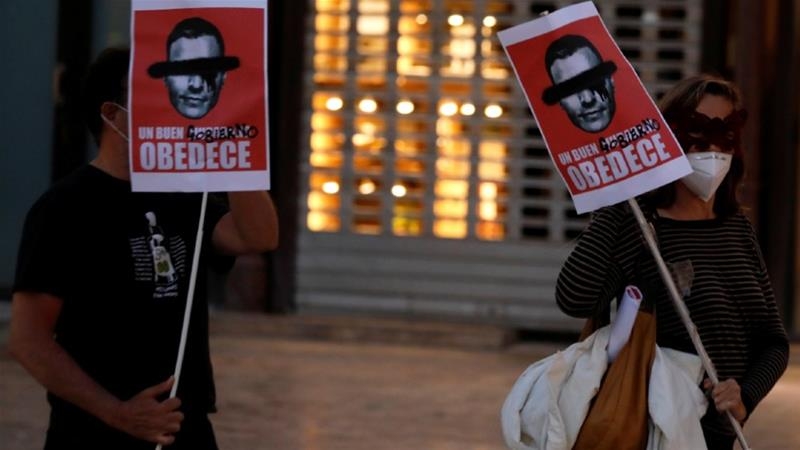 Spain's government on Tuesday said it would seek parliament's approval to extend the state of emergency by another fortnight, until June 7, even as the number of new coronavirus cases keeps falling.
The current state of emergency is set to expire on May 23 and Prime Minister Pedro Sanchez had initially said he would seek an extension of around a month.
But the government reduced the request to two weeks to secure the support of the centre-right Ciudadanos party, thereby guaranteeing it would pass during Wednesday's vote in the 350-seat chamber where Sanchez's coalition is in a minority.
"If there is no state of emergency, we won't have the capacity to restrict movement and the ongoing sacrifice that everyone has made will have served for nothing," government spokeswoman Maria Jesus Montero said.
The lockdown was first imposed on March 14 and it has since been renewed four times, despite growing criticism of Sanchez over his management of the crisis, notably from his rightwing opponents who did not support the last extension two weeks ago.
The government has also not ruled out a further extension, having shown itself in favour of continuing until the rollback of the lockdown restrictions is completed at the end of June.
"Limiting mobility, which is a fundamental right, can only be achieved like this," said Health Minister Salvador Illa.
The government says the decree has allowed it to battle the epidemic and bring down the daily number of new cases, which on Tuesday stood at 295, health ministry figures showed.
Over the same period, 83 people died from the virus, in what was the third straight day the figure had been under 100.
Fernando Simon, the health ministry's emergencies coordinator, said the medical authorities had managed to reduce the time between initial consultation and diagnosis of infection "to under 48 hours".
This, he said, meant that "if the cases of the epidemic flared up again, we would be capable of locating (them) quickly".
Spain has suffered one of the most deadly outbreaks of the virus, suffering more than 27,700 deaths out of more than 232,000 cases.
But the government's management of the crisis has come under fire in recent days with street protests in Madrid and other cities, where demonstrators banged pots and demanded Sanchez's resignation amid cries of "freedom".
"(These protests) are demanding freedom of movement and what that means at this point in time... is the freedom for the infection to spread and freedom to impact the health of other people," spokeswoman Montero said.
Figures from a survey by the state-run Centre for Sociological Studies (CIS) published on Tuesday showed 95 percent of Spaniards support the lockdown and 60 percent believe it should be extended, despite the protests. -- AFP