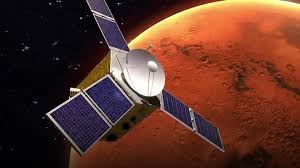 After sending its first astronaut to space last year, the United Arab Emirates is to launch a probe to Mars in July, state news agency WAM announced Tuesday.
The unmanned probe, named Hope, will be "the first interplanetary exploration undertaken by an Arab nation", it said.
WAM said the probe would be launched on July 15, at 2051 GMT, from Japan's Tanegashima Space Centre, using a Mitsubishi Heavy Industries platform.
It is set to make a 495-million-kilometre (307-million-mile) journey to reach and orbit the Red Planet.
Last September, Hazza al-Mansouri made history as the first Emirati in space. -- AFP