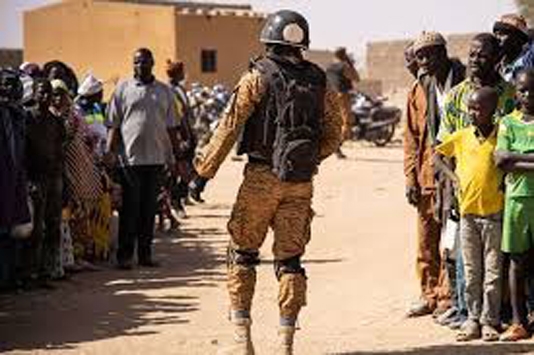 Two Burkina Faso soldiers and five civilian defence volunteers have been killed during an ambush on a military patrol in the restive north of the country, security sources said Tuesday.
The attack occurred on Monday as soldiers from the military detachment in Banh in Loroum province were carrying out a patrol in the area, the sources said.
“Two soldiers were killed along with five civilians,” a security source told AFP.
Another security source said the civilian casualties were “defence volunteers who were with the military unit during the patrol,” adding two soldiers also died.
The source said four others in the patrol were wounded, without giving further details.
Al-Qaeda-affiliated jihadist alliance GSIM claimed responsibility for the attack, claiming to have killed “nine soldiers” in an ambush and taken weapons and vehicles, in a text sent to AFP late Tuesday.
The Mali-based GSIM (Group to Support Islam and Muslims) comprises several different jihadist groups in the Sahel.
On May 11, jihadists killed eight Burkinabe soldiers during an attack close to the Niger border in Yagha province, security sources said at the time.
Burkina Faso is part of a regional effort to battle an Islamist insurgency, along with neighbouring Mali and Niger, Mauritania and Chad.
However, the West African country’s under-equipped and poorly trained military has been unable to stem the violence despite help from France, which has 5,000 troops in the region.
According to UN figures, jihadist attacks in Burkina Faso, Mali and Niger left nearly 4,000 people dead last year. Some 800,000 people have been displaced since 2015.