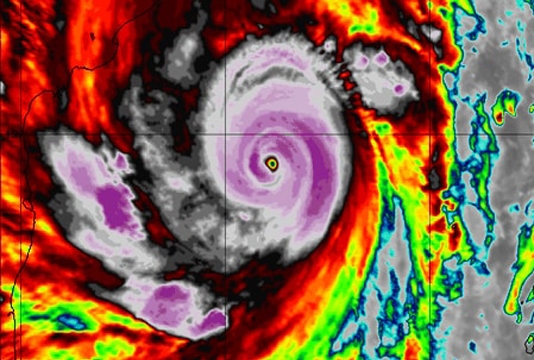 Global storm tracker AccuWeather in its latest report said Amphan remained an “extremely dangerous storm” as it continued to track toward northeastern India and southern Bangladesh coasts as the highest tropical cyclone to make a landfall later today.
“This cyclone is forecast to make landfall on Wednesday night, local time, near the border of India’s West Bengal state and Bangladesh,” the AccuWeather reported adding that as previously predicted the storm lost some of its intensity but still proceeding with massive rage.
The weather agency said until Tuesday evening Amphan had maximum sustained winds of 213 km/h (132 mph), the equivalent of a strong Category 4 hurricane in the Atlantic or East Pacific Oceans.
AccuWeather remained to its previous prediction that Amphan’s path would lead it directly to India’s West Bengal capital Kolkata after ravaging Bangladesh and Indian coastlines.
The US-based weather foresters’ analysis largely appeared identical to Bangladeshi and Indian met office predictions while both the countries were carrying out a last hour massive evacuation campaign to minimize fatalities.
Officials in both the countries said they were trying to follow social distancing measures in place for the COVID-19 crisis while relocating millions of people to makeshift cyclone shelters.
Reports from southwestern Bangladesh and India’s northern coast said the regions started witnessing downpour as evacuation continued while authorities in both the countries ordered their fishing boats to anchor on shorelines.
Bangladesh’s met office said coincidence with “new moon phase” heightened Amphan’s rage while AccuWeather reported conducive conditions including light wind shear and warm ocean waters, allowed Amphan to quickly climb the scale meant for tropical cyclone as it brewed in the bay.
“While some additional weakening is expected just before Amphan makes landfall, the cyclone will still be a dangerous storm,” the storm tracker said.
Bangladesh authorities on late yesterday ordered evacuation of maximum possible number of people to safety before midnight as the me office said the region’s first super cyclone in decades prompts it to contemplate issuing the highest danger signal number in their existing scale.
The met office current kept danger signal number 7 for the southwestern Mongla and Payra ports in a scale of 11 while meteorologists said the subsequent great danger signal nos. 8, 9 and 10 carry identical meaning in terms of intensity while the numbers differ only to indicate approaching storms directions.
Signal no. 11 is called Communication Failure Signal No. XI, indicating severed communications of the meteorological warning centre to the affected region.
“The local authorities have been directed to complete the evacuation before midnight today,” state minister for disaster management Dr Enamur Rahman told an emergency news briefing at his office.
The disaster management ministry earlier set a target of evacuating nearly 2 million people to safety readying 12,078 cyclone shelters but the state minister said it could be difficult to move out people to safety on Wednesday amid approaching killer storm.
The minister said a large number of people by now were brought to cyclone shelters in 19 vulnerable districts in southern coastlines.
Meteorologists, meanwhile, said the world largest mangrove forest the Sundarbans was likely to absorb the main brunt of the Amphan onslaughts as it did many times over the centuries including that of the recent major storms to minimize human casualties.
“The Sundarbans always absorbed the brunt of cyclones whichever hit the coastlines alongside the Bangladesh-India, we expect the forest to face the initial impact of Amphan like foot soldiers,” meteorology department director Shamsuddin Ahmed told newsmen.
Bangladesh met office issued its latest bulletin after midnight yesterday saying Amphan moved further northwards and lied over northwest bay and adjoining west-central bay (lat. 18.3°n, long. 87.0°e) and was centred at midnight last night about 690 km southwest of Chattogram, 655 km southwest of Cox’s Bazar, 545 km south-southwest of Mongla and 550 km south-southwest of Payra ports.
“Maximum sustained wind speed within 85kms of the cyclone centre is about 200kp/h rising to 220 kp/h in gusts/squalls,” it read.
The Indian met office in a midnight bulletin said Amphan was very likely to move north-northeastwards across northwest Bay of Bengal and cross Bangladesh-West Bengal coasts between Bangladesh’s Hatiya Island and India’s Digha close to the Sundarbans during afternoon to evening hours today.
Amphan’s maximum sustained wind speed is predicted to be 155-165 kp/h gusting to 185kkp/h, during the landfall after which it was very likely to continue to move north-northeastwards, across Gangetic West Bengal and Bangladesh and weaken gradually.
“It is likely to maintain the intensity of Cyclonic Storm till the morning of 21stMay and thereafter it will weaken into a Deep Depression over Bangladesh,” it said.