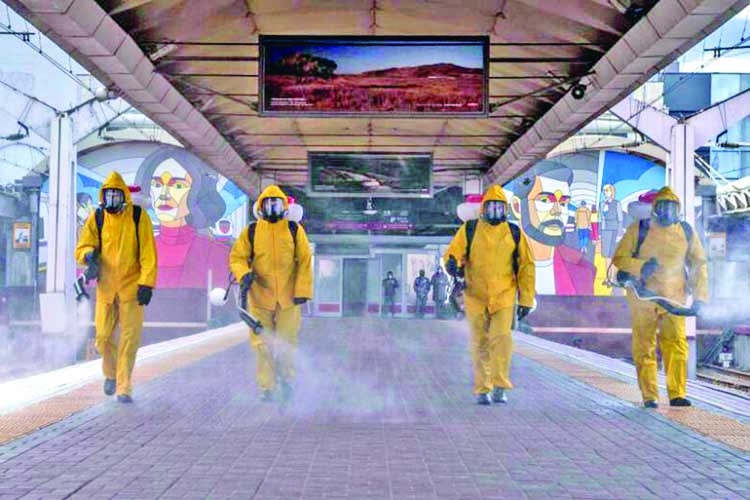 Workers spray sanitizer at Moscow Leningradsky railway station on Tuesday. -NYTIMES
Russia on Wednesday reported its highest ever daily coronavirus death toll of 135, bringing the country's total fatalities to nearly 3,000.
Overall infections also passed 300,000, but the number of active virus cases in the country dropped for the first time.
Russia has recorded far fewer deaths than other countries with large outbreaks, but critics have cast doubt on the low official mortality rate and accused authorities of under-reporting in order to play down the scale of the crisis.
Russian health officials say one of the reasons the count is lower than in the United States and parts of western Europe is that only deaths directly caused by the virus are being included. Authorities also say that since the virus came later to Russia, there was more time to prepare hospital beds and launch wide-scale testing to slow the spread. The official toll now stands at 2,972, with 308,705 cases recorded.
For the first time on Wednesday, Russia recorded more people recovering in the past 24 hours - 9,262 - than the number of people testing positive, with active cases dropping by 633. The number of new cases at 8,764 was the lowest daily increase since May 1.
One of Russia's most high-profile virus cases, Prime Minister Mikhail Mishustin, returned to work on Tuesday after receiving treatment for the illness in hospital. He said on Wednesday the outbreak is entering a more stable phase, while warning that restrictions should be lifted carefully in the 17 regions where such moves have been authorized Russia has the second highest number of infections behind only the United States, but the number of new cases has fallen below 10,000 for five days in a row.
The North Caucasus region of Dagestan has emerged as a virus hotspot, with the fifth highest number of infections. The Muslim-majority region confirmed a total of 36 deaths.
Dagestan, with a population of 2.9 million, has more than 3,600 confirmed cases of the virus and local officials have described the situation as a "catastrophe" with hospitals overwhelmed. President Vladimir Putin highlighted the region's grave situation this week, pledging to send aid and implement "urgent measures".
--- AFP, Moscow