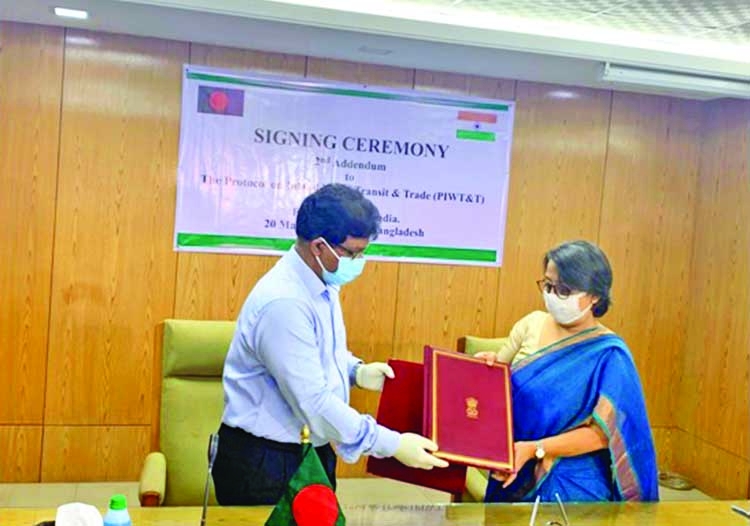 Indian High Commissioner to Bangladesh Riva Ganguly Das and Bangladesh's Shipping Secretary Mezbah Uddin Chowdhury signed the second Addendum to the Protocol on behalf of Bangladesh on Wednesday. -AA
Bangladesh and India on Wednesday made some decisions on the extension of protocol routes, inclusion of two new ones, and declaration of five new Ports of Call to facilitate trade between the two countries.
These decisions will come into effect with the signing of the second Addendum to the Protocol, reports UNB.
Indian High Commiss-ioner to Bangladesh Riva Ganguly Das and Bangladesh's Shipping Secretary Mezbah Uddin Chowdhury signed the second Addendum to the Protocol on behalf of Bangladesh.
Protocol on Inland Water Transit and Trade
Bangladesh and India have a long standing and time-tested Protocol on Transit and Trade through inland waterways of both countries, according to Indian High Commission in Dhaka.
This Protocol, which was first signed in 1972 immediately after the independence of Bangladesh is a reflection of shared history, trusted friendship and mutually beneficial partnership between the two countries. It was last renewed in 2015 for five years with a provision of its automatic renewal for a further period of five years giving long-term assurance to various stakeholders.
The Standing Committee on the Protocol and the Shipping Secretary Level Talks are the institutional arrangement between the two friendly neighbours to discuss and make the Protocol more effective.
During the discussions between India and Bangladesh at these meetings held in October, 2018 in New Delhi and in December, 2019 in Dhaka, there were key decisions.
Agreed Points
Routes:  The number of Indo-Bangladesh Protocol (IBP) routes are being increased from eight to 10 and new locations are also added to the existing routes.
Inclusion of Sonamura-Daudkhandi stretch of Gumti River (93 km) as IBP route No. 9 & 10 in the Protocol will improve the connectivity of Tripura and adjoining States with India and Bangladesh's economic centres and will help the hinterland of both the countries. This route shall be connecting all the existing IBP routes from 1 to 8.
The operationalization of Rajshahi-Dhulian-Rajshahi Routes and their extension up to Aricha (270 km) will help the augmentation of infrastructure in Bangladesh as it would reduce the transportation cost of stone chips/aggregate to northern part of Bangladesh through this route. It will also decongest Land Custom Stations on both sides.
Kolkata-Shilghat-Kolkata as well as Kolkata-Karimganj-Kolkata], Kolaghat in India have been added.
Kolkata-Karimganj-Kolkata and Karimganj-Shilghat-Karimganj have been extended up to Badarpur in India.
In these routes, Ghorasal in Bangladesh has also been added.
Ports of Call
Under the current Protocol, there are six Ports of Call each in India and Bangladesh.
Those are Kolkata, Haldia, Karimganj, Pandu, Shilghat and Dhubri on Indian side and Narayanganj, Khulna, Mongla, Sirajganj, Ashuganj and Pangaon on Bangladesh side.
The newly added five Ports of Call on Indian side are: Dhulian, Maia, Kolaghat, Sonamura and Jogigopha and on Bangladesh side are: Rajshahi, Sultanganj, Chilmari, Daudkandi and Bahadurabad.
Two more extended Ports of Call - Tribeli (Bandel) and Badarpur on Indian side and Ghorasal and Muktarpur on Bangladesh side - have been added through this addendum, increasing the number to eleven Ports of Call and two extended Ports of Call in both the countries.
Inclusion of Jogigopha in India and Bahadurabad in Bangladesh as a new Port of Call will provide connectivity to Meghalaya, Assam and Bhutan.
Jogigopha also becomes important, since, a Multimodal Logistics Park is proposed to be established there.
The new Ports of Call would enable the loading and unloading of cargo transported on the Indo Bangladesh Protocol Route and provide a stimulus to the economic development of the new locations and their hinterland.
Movement on shallow draft mechanized vessels
As a path-breaking development, both sides have agreed to introduce trade between Chilmari (Bangladesh) and Dhubri (India)  through the use of  shallow draft mechanized vessels, provided these are registered either under Inland Shipping Ordinance 1976 of Bangladesh or Inland Vessels Act, 1917 of India as per provisions of Article 1.3 of the Protocol and conform to safety requirements.
This initiative will allow export of stone chips and other Bhutanese and North East cargo to Bangladesh and easy access for the traders to the hinterland of Bangladesh, enhancing the local economy in Bangladesh and the lower Assam region of India.
New ppportunities on cargo movement:  Under this Protocol, Inland vessels of both the countries can ply the designated protocol route and dock at Ports of Call in each country, notified for loading/unloading of cargo.
There has been significant improvement in the movement of cargo vessels in an organized manner on the Protocol route carrying both the transit cargo to North East region of India and vice-versa and export-cargo to Bangladesh.
The Indian transit cargo is mainly coal, fly-ash, POL and ODC for power projects in North East region.
The other potential cargo for movement is fertilizers, cement, food grains, agricultural products, containerized cargo etc.
The export cargo from India to Bangladesh is mainly fly-ash which is to the tune of 30 lakh MT per annum. Around 638 inland vessels (including 600 Bangladeshi flag vessels) completed with approximately 4,000 loaded voyages annually.
It is expected that these additions to the Protocol will greatly facilitate the bilateral trade, with improved reliability and cost effectiveness for the business community and the people of both the countries.
The connectivity provided by the existing and the newly added protocol routes is all the more pertinent in the present Covis-19 scenario as it will be instrumental in providing economical, faster, safer  and greener mode of transport  for traders and business communities of both the countries and will also have environmental benefits for the region.