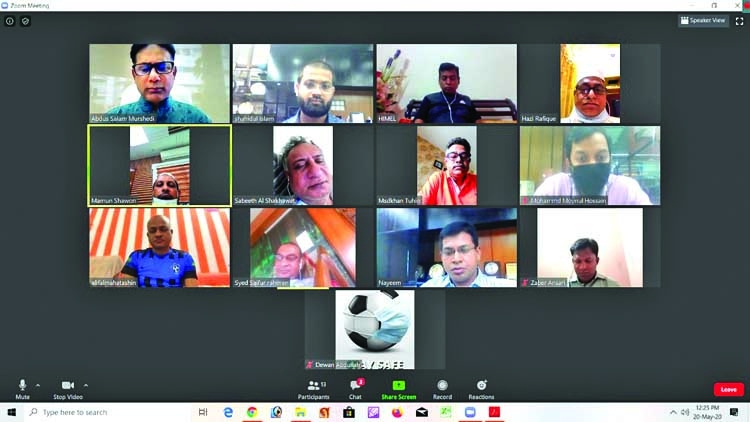 Country's prestigious football tournament Bangladesh Championship League (BCL), the 2nd tier football league after the Bangladesh Premier League (BPL) 2019-20, was finally abandoned  on Wednesday.
The Bangladesh Football Federation (BFF) officially decided to abandon BCL due to Coronavirus (Covid-19) pandemic after BFF's professional football league committee meeting held on Wednesday with a video conference.
Earlier, Country's most prestigious football tournament the 13-team Bangladesh Premier League (BPL) Football 2019-20, was finally abandoned on Sunday. The Bangladesh Football Federation (BFF) in it's EC meeting on Sunday (May 17) with Federation president Kazi Salahuddin in the chair, decided to abandon the ill-fated league, which was halted on March 15 after the 6th round due to Coronavirus (Covid-19) pandemic.
The meeting took the decision considering the appeal of most of the participating clubs and also the clearance of AFC. The BFF earlier sought suggestion from their upper body AFC to take decision on the league in this crisis situation and the Asian body (AFC) advised them on last Saturday to take decision in their own way and to inform it to AFC as early as possible.
Former champion Dhaka Abahani and Chattogram Abahani dominated the league till the 6th round securing 13 points each. Following the cancellation of the league, this year's BPL football find no new champions, runners up and relegated team.
Moreover, the participation of two Bangladeshi club teams in the AFC Cup Football now became uncertain with the decision. The BFF meeting also postponed this year's Independence Cup Football and Under-18 Football for the same reasons.
Earlier, the participating clubs were divided over the future of Bangladesh Premier League 2019-20 and were failed to decide whether they will carry the league or to cancel it. But, the BFF then opted to wait until end of May before taking any decision. Most clubs led by holders Bashundhara Kings agreed to call off the league and to start the season afresh during the league committee meeting on April 26 while two former champions Dhaka Abahani Limited and Sheikh Jamal Dhanmondi Club wanted to continue.