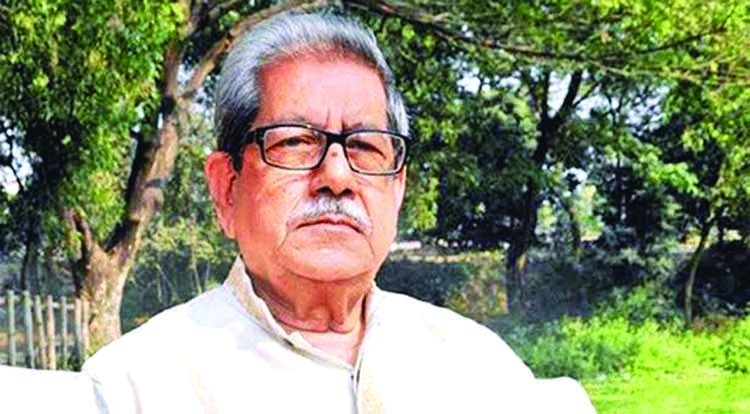 It would be an aspersion to write an obituary of a stalwart like Professor Anisuzzaman, who is embedded in the history of Bangladesh. He may not be a tall person, but the gigantic litterateur had a loud voice indeed, which had been heard in all the regimes which governed the country.
He never compromised to speak up to establish a secular nation and also demanded justice for those marauding Pakistan army henchmen for committing crimes against humanity during the brutal birth of Bangladesh. Prof Anisuzzaman, popularly known as 'Anis Sir', was a bitter critic of giving political space to Islamist parties advocating 'political Islam' regime in a secular, tolerant and pluralist society. Well, it was summer in Kolkata. Maulana Abul Kalam Azad Institute of Asian Studies, India (MAKAIAS), a state-run think-tank, organised a seminar on Bangladesh and India in 1996 at the colonial era majestic Great Eastern Hotel.
Dr. Ranabir Samaddar, a leading Indian scholar and Director of MAKAIAS selected me to present a paper. He cautioned that the paper should be taken seriously as it was an academic exercise, not journalism. My presentation was scheduled for the second day. I was excited to learn that the session would be chaired by the revered personality Prof Anisuzzaman. He flew from New Delhi, where he was on a stint as Visiting Scholar at Jawaharlal Nehru University (JNU).
On the podium, he was quickly introduced to the paper presenters from Jadavpur University, Kolkata University and from Punjab University. He was visibly confused when he heard that I was a journalist and the paper was my first.
He told the gathering of eminent academics that as the last speaker I would speak for five minutes only. I was embarrassed and to express my anger I abruptly stopped my presentation on the fifth minute, seeking an apology from the audience due to time constraints. Within moments there was pandemonium in the seminar room. The chairperson hesitantly extended another five minutes for me.
This time I retorted, "I request the chair for another 15 minutes, please." Hearing the murmuring in the room, which included several senior journalists from Kolkata, he said: "Okay, another 10 minutes only, but please finish up!" Moments after my speech, the floor was opened for questions and comments. Unfortunately, not a single question was directed towards the three academics.
My paper was on rural women in Bangladesh who violently protested the donor dictated development projects. At that time the exiled writer Taslima Nasreen's book Lajja (Shame) by Penguin India had been published. The Indian media were vocal about her ordeal in Bangladesh. My thematic paper drew a barrage of comments. Finally, Anis Sir patted me on the back and softly said in Bangla to take notes.
Like a reporter, I wrote down the issues raised in the hall. Despite being nervous, I confidently responded that there were thousands of Taslima Nasreens in Bangladesh's villages. Then why were we only talking about the feminist writer? This comment caused another round of uproar in the hall, but it was time for a lunch break.
While leaving the podium Anis Sir asked, 'Have we met in Dhaka?" I  smiled. "Sir, we met several times, but me as a reporter."  I quickly added that two of his favourite students, who were senior teachers in universities in Chittagong and Dhaka, were my childhood friends. He asked me, "Who?" I replied again, "Sir, your best students you love the most."
Months later one of his favourite students related to me what Anis Sir had told him: "I have never heard of a journalist who would impress a room full of academics."
One morning in 1987, he called me and requested me to visit his quarters at the Dhaka University campus. On my arrival, he said he had returned from Kolkata. He gave me the book, "State, Development and Political Culture: Bangladesh and India", edited by Barun De and Ranabir Samaddar and published by Har-Anand Publications, New Delhi, 1997. He said, "I have read your article with deep interest in the book, which you presented at Kolkata.
It's indeed a brilliant piece. I never thought the agitations of village women against foreign projects could be a unique research theme." I smiled in appreciation. While living in self-exile in Canada I had an opportunity for an unlimited "jompesh adda" with him in Toronto for a couple of days in the summer of 2008. I quietly said, "Sir, do you remember you wanted to elbow me out at the Kolkata seminar?" He heartily laughed and told others that was when he accidentally met me! Laughter again!
Well, the last time I met Prof Anisuzzaman and exchanged pleasantries with him was on 19 February this year at a reception to honour him on his 83rd birth anniversary at Dhaka Club hosted by Khondoker Rashidul Huq (Naba Bhai).