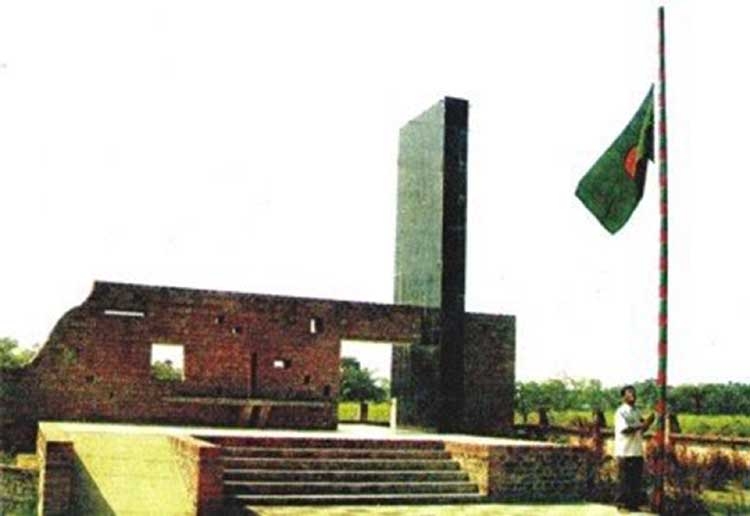 The monument in Chuknagar paying homage to the victims who embraced martyrdom during a massacre by Pakistan Army in 1971.
The liberation of Bangladesh on December 16, 1971 from the Pakistani occupation forces was an outcome of nine months sustained armed resistance by the Bengalis of the then East Pakistan. This struggling period was marked by a series of genocide on the Bengali population committed by the military of West Pakistan. Most of these massacres did not get recorded in the history of Bangladesh's freedom struggle, not even in the state-published documents of the Liberation War. One such worst massacre by the Pak forces was carried out on May 20, 1971 in Chuknagar of Khulna district.
The mass-killing is infamously known as 'Chuknagar Massacre', one of the worst massacres committed during the Liberation War, killing at least ten thousand people-men, women and children. A memorial called 'Chuknagar Shahid Smritishoudho' or Chuknagar Martyred Memorial bears testimony to the story of that brutal incident.
Chuknagar is a small town under Dumuria upazila of Khulna district, adjacent to the Indian border. It was the early May of 1971. After the start of the Liberation War, many people of Khulna region fled from their homestead fearing attack by Pak forces. Panic gripped among these people when they learnt that notorious Jamaat-e-Islami leader of the area Maulana Yusuf had formed (May 5, 1971) a 'Razakar Bahini' and started torturing and killing people at the concentration camps in Khulna city and elsewhere in the district. The main Razakar camp was at the city's Tootpara area, which was locally known as 'Bhooter Bari' (haunted house).
By May 15, 1971, a large number of refugees from nearby localities gathered at Chuknagar as rumors broke out of an impending Pakistani attack in the area. They had assembled there to flee to India through any available border route at an opportune time. It is said that around ten thousand people had gathered there from Khulna, Bagerhat, Satkhira, Jessore and Gopalganj.
On May 20, thousands of refugees took shelter at Chuknagar, Patkhola (now Jhautala), Maltia and on the banks of Bhadra river. Suddenly, a Pakistani troop of around 30 personnel equipped with semi-automatic rifles & light machine guns arrived at  the place by two trucks from Satkhira in the early hours (10:00) of the day. They took position at Patkhola and opened fire at the assembled Bengali refugees.
The troops later moved towards Chuknagar Bazaar and continued firing until    15:00 Hours. The forces sprayed bullets on the Bengalis of all faiths in broad daylight from their light-machine guns & semi-automatic rifles killing them on the spots within moments. Many people drowned as they jumped into the river in a largely futile attempt to flee the carnage. Within a few minutes a lively town turned into a city of death. Local people later disposed the dead bodies by throwing them into the river. That must be the biggest genocide in the world history as Pakistani military and their collaborators killed thousands in a few minutes on that day.
There were bodies over bodies. Dead children were found on their dead mothers' laps. Wives were hugging their beloved husbands to protect them from the killer bullets. Fathers were embracing their daughters to shield them. Within a flash of an eye, they all were just dead bodies. Blood streamed into the Bhadra River, it became a river of corpses. A few hours later when the Pak forces ran out of bullets, they killed the rest of the people with bayonets.
The targeted mass-killing by the Pak forces which started from March 25, 1971 was intended to downtrodden the aspiration of Bengalis for independence from the discriminating rule by West Pakistani elites. During the nine-month war, the Pakistani military and their local collaborators killed 3 million people all over the country. Besides, over 2 lakh women became victims of systematic abuse and molestation in the hands of the Pakistan forces.
Thousands of houses were looted and burnt down, villages were devastated. More than 10 million people took refuge in neighbouring India to save their lives. Death of such a large number of people in such a short span of time is unprecedented in the history of the world, which is why this is regarded as one of the worst genocides of the world. But, Pakistan continues to deny till this date that any genocide took place and has not apologized for the atrocities. They continue celebrating Pakistan Day and Kashmir Solidarity Day from this very soil shamelessly.
It is time that Pakistan shuns their barbaric ideology associated with Islamic extremism. Pakistan ought to have tendered an unconditional apology to Bangladesh - this is something that Bangladesh and its people have rightfully demanded for decades. In the current geopolitics, Pakistan has become an isolated nation in the region because of its inability to take pragmatic actions toward reconciling differences with its neighbours.
Iran views Pakistan with suspicion, Afghanistan holds Pakistan in very low regard, India has largely won the public relations battle by pointing to Pakistan's role in nurturing militancy in Jammu & Kashmir, and the United Arab Emirates and Saudi Arabia, two historic allies, have cooled off on Pakistan and drawn closer to India. This leaves China as the only reliable partner in the region and the basket in which Pakistan has put all its eggs.
While China is truly a strategic ally for Pakistan, it too has its own economic and geopolitical interests with other countries in the region, countries with which Pakistan has frosty relations at best. Relevant to mention that China also did not recognize Bangladesh as a new nation till about 1975.
While Awami League government has conducted a bold and exemplary War Crimes trial against the collaborators of Pak military's genocide in Bangladesh, 'Mujib Borsho' this year and next year the 50th anniversary of the Liberation War, is the right time to call for an international trial of the Pakistani army itself for its role in war crimes and genocide in 1971. This will help give due recognition to 'Chuknagar Massacre' its place in history as a day of genocide.


The writer is a freelancer and a columnist