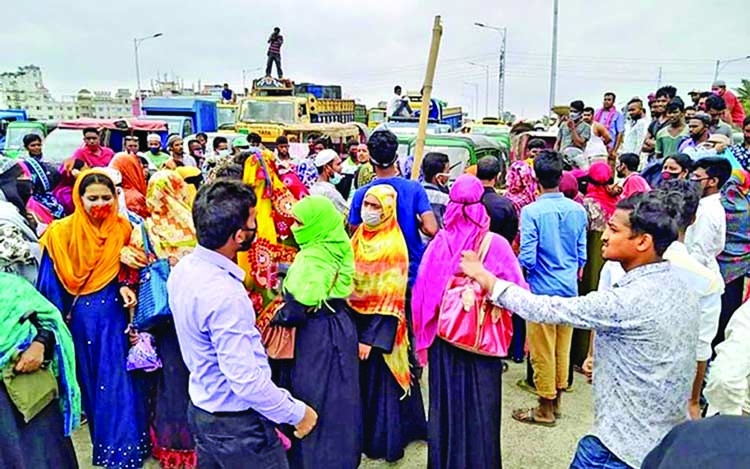 Readymade garment workers thronged capital's Postogola Bridge and its adjoining areas on Wednesday demanding wages and Eid bonus. -Agency
Readymade garment workers on Wednesday took to the streets demanding payment of wages and Eid-ul-Fitr bonuses in another round of protests in Dhaka during the ongoing coronavirus shutdown. The protesters occupied the Postogola Bridge and its adjoining road early to press home their demands, bringing traffic in the area to a standstill.
Hundreds of workers of Civic Apparels and a garment factory in Alam Market demonstrated on the bridge and the main roads, said Assistant Commissioner of police (Shyampur) Shah Alam. Police are working to contact the owners of the factories and persuade the workers to end their protest, he added. Meanwhile, angry garment workers of Shamsher Apparel also descended on the capital's Gulshan 1 circle in protest around 10 am Wednesday, police said.
Traffic in the area was disrupted for about half an hour before the workers cleared the road, according to Gulshan Police Inspector Aminul Islam.
The protesters were demanding that their Eid-ul-Fitr bonuses be paid in full, he said. Police later reached out to the factory authorities who provided assurances to the workers over the payment.