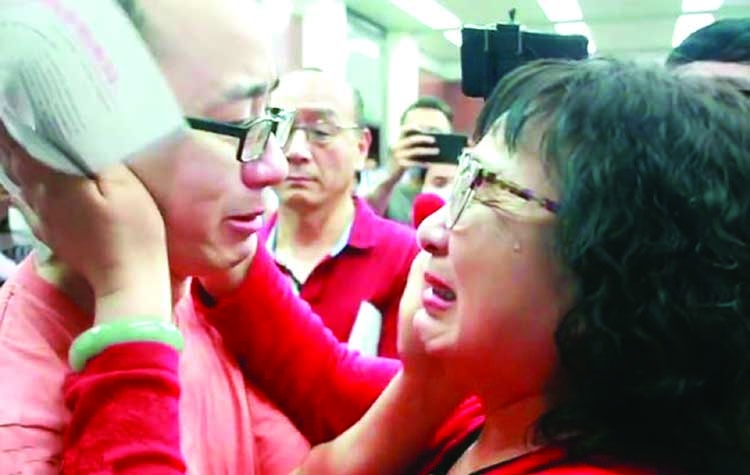 A 60-year-old woman has reunited with her 34-year-old son who was abducted at the age of two after she searched for him tirelessly for over three decades.
The parent, Li Jingzhi, had spent the last 32 years traveling across China on a quest to look for her child, nicknamed Jia Jia, after he was kidnapped on the street in 1988. The mother and son finally met on Monday after police tracked down a family who adopted Jia Jia years ago by paying a human trafficker 6,000 yuan (£690), Chinese media report.
'I saw you on TV six years ago. I thought the picture [of the child] really looked like me,' the tearful son told his mother. 'But I didn't know [you were my mother].' The overjoyed mother can be heard replying: 'My Jia Jia is back!'
On October 17, 1988, Jia Jia's father, known by his surname Mao, took the two-year-old boy out to play in their neighborhood in the city of Xi'an. Mr Mao then walked into a hotel to ask for a cup of water for the thirsty toddler - and when he returned, he realized his son had gone missing. The terrified father immediately started looking around in nearby areas with the hotel staff - but Jia Jia was nowhere to be seen.
Xi'an police also searched the local stations after the incident but failed to find any traces of the toddler. Ms Li, who was on a business trip when Jia Jia went missing, reportedly fainted when she received the news.

Police then set up a team to investigate the case. Officers traveled to neighboring provinces to look for Jia Jia, but to no avail.
Ms Li and her husband started spending the next few years looking for their young child, and they eventually divorced after drifting apart, according to Xi'an Evening News.

As the Chinese mother continued her quest of searching for her son, Ms Li met a group of parents whose children had also been missing. Together, they set up a local organization dedicated to helping families find their lost sons and daughters.
For more than three decades, Ms Li visited over 20 provinces and hundreds of towns as she relentlessly searched for her beloved child.

Human trafficking has been a serious issue in Chinese society. An estimated 70,000 youngsters - from babies up to teenagers - are snatched away from their families in the country every year.

Some are bought, some are simply stolen. They end up as laborers, in forced marriages or as the adoptee of wealthy families, either in China itself or overseas.