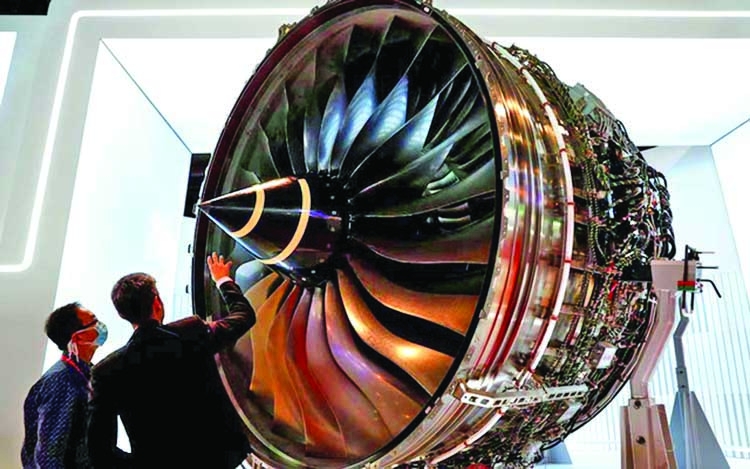 Rolls-Royce plans to cut at least 9,000 jobs, or more than a sixth of its workforce, in the latest blows to the UK economy and aviation industry dealt by the coronavirus pandemic.
The company, which makes engines for planes such as the Boeing 787 and Airbus 350, said on Wednesday it could also close factories as it shrinks to fit the smaller market it expects to emerge from the crisis.
Airlines and their supplies have been among the hardest hit businesses by lockdowns to contain the pandemic, with passenger air travel grinding to a virtual halt.
Britain, like many other economies, is also bracing for a deep recession, with jobless claims in April leaping to the highest in nearly 24 years.
"We have to reduce our cost base and adapt to the new world, matching our capacity with expected demand," Rolls-Royce chief executive Warren East told reporters, unveiling the company's biggest round of cuts since privatisation in 1987.
The 9,000 jobs, out of a global staff of 52,000, will go predominantly from Rolls's civil aerospace business, which generates just over half of its 15 billion pounds ($18 billion)of annual revenues.
Rolls said it was targeting 1.3 billion pounds of annual cost savings, with about 700 million coming from layoffs plus other cuts that could include factory closures.
Headquartered in Derby, central England, about two-thirds of Rolls civil aerospace jobs are based in the United Kingdom, East said, adding that was "probably a good first proxy" of where the jobs were likely to be lost.
East said Rolls had 16 to 17 major civil aerospace manufacturing locations across the world, including big presences in Germany and Singapore.
Consultations with unions will now get underway, with job losses also expected in office support functions. Rolls' defence unit will be spared, though, as military demand remains robust.
Forecasting air travel will not recover for three to five years, East said Rolls was preparing for aviation activity to be about a third less than in 2019.
Government schemes to help pay workers had been useful in the short term, with Rolls' furloughing 4,000 staff under the UK scheme, but the company needs to prepare for a future where its airline customers fly less, East said.
The cuts follow a 2018 programme to axe 4,600 jobs, although 1,000 job losses outstanding from that round are included in the 9,000. Rolls has also been grappling with a long-running engine problem which forced airlines to ground planes.
Its shares were last down 2%, having dropped 62% this year to 11-year lows.
--- Reuters