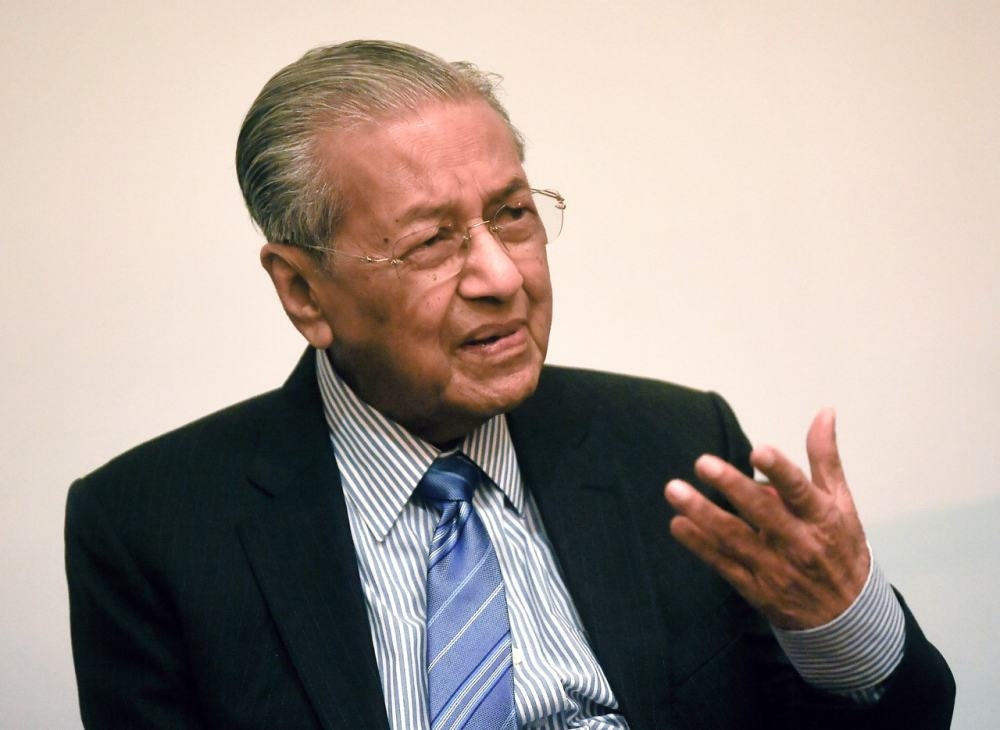 Tun Dr Mahathir Mohamad said today he is baffled with the Prime Minister’s Office (PMO) statement denying Tan Sri Muhyddin Yassin was involved with the discharge of Riza Shahriz Abd Aziz.
“As far as I know, nobody had even accused the prime minister,” the Langkawi MP said in a brief statement.
“This is the same with the repeated claims that Muhyiddin has no intention of becoming a prime minister. No need to protest because nobody nominated Muhyiddin to become one.
“But in the end, let the party be destroyed as long as he can become the prime minister,” he added.
He was referring to the current fracture of Parti Pribumi Bersatu Malaysia after most of its Supreme Council members decided to break away from Pakatan Harapan and support the Perikatan Nasional government led by Muhyiddin.
On Monday, the PMO said Muhyiddin was not involved with the controversial decision to let Riza go from his money-laundering charges over US$248 million (RM1.08 billion by today’s exchange rate) of funds linked to the 1MDB scandal.
The PMO insisted that the decision was achieved by the prosecutors and the accused through the latter’s representation to the Attorney-General’s Chambers (AGC).
On July 5, 2019, Riza was charged with five counts of money-laundering offences over the US$248 million under Section 4(1)(a) of the Anti-Money Laundering and Anti-Terrorism Financing Act 2001 (AMLATFA) — which was the version of the law applicable at the time of the alleged crime from April 2011 to November 2012.
If convicted under any of the five counts, the penalty is a maximum RM5 million fine or maximum five-year jail term or both.
Riza’s charges were not brought under an amended version of the law which comes with heavier punishments, since he allegedly committed the offences before the newer version of the law came into force.
The newer version of the law, Anti-Money Laundering, Anti-Terrorism Financing and Proceeds of Unlawful Activities Act 2001 (AMLATFPUAA) which came into force from September 2014 onwards, carries a heftier penalty of a maximum 15-year jail term and a fine of not less than five times the sum of the illegal funds or RM5 million, whichever is higher.
The current Attorney-General Tan Sri Idrus Harun has claimed that the decision was agreed “in principle” by his predecessor Tan Sri Tommy Thomas, but the latter has twice vehemently denied he would come up with what he called a “sweetheart deal” with Riza.
Idrus had said this arrangement would result in the Malaysian government’s expected recovery of around US$108 million (subject to the eventual proceeds from the sale of the assets and deduction of associated costs) to be credited into the 1MDB Asset Recovery Trust Account, which would be in addition to over US$57 million traceable to 1MDB and previously forfeited in April 2019 from Riza’s co-owned Red Granite Pictures.
The MACC had earlier on May 14 said the deal would result in the Malaysian government’s expected recovery of overseas assets involved in the offences at an estimated value of US$107.3 million.
Written by Zurairi Ar, Malay Mail