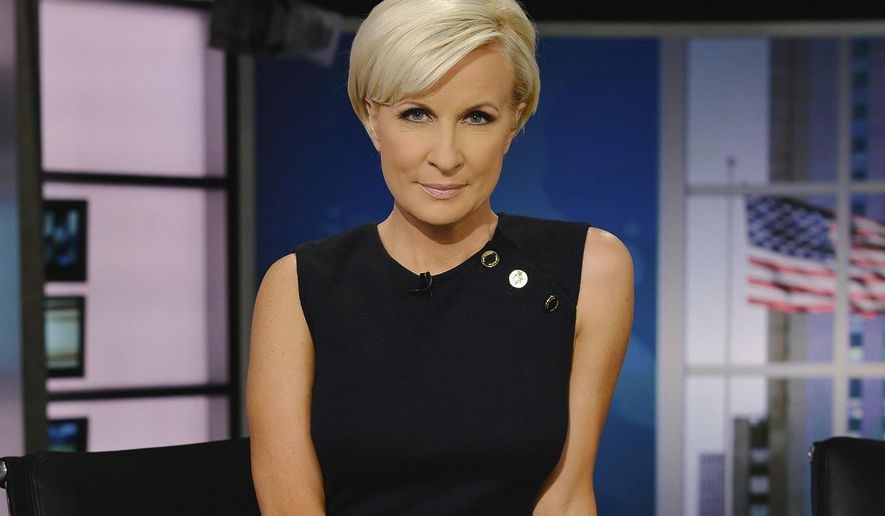 A US TV host has furiously rebuked President Donald Trump for falsely suggesting her husband and co-presenter may have got away with murder.
In tweets, Mr Trump has appeared to link MSNBC anchor Joe Scarborough to the death of an aide two decades ago, a conspiracy theory debunked by police.
"Donald, you're a sick person," anchor Mika Brzezinski said on air as she defended her husband.
She also demanded Twitter take down the president's incendiary tweets.
What else did Brzezinski say?
"He's once again tweeting conspiracy theories about Joe, falsely accusing him of murder," Ms Brzezinski said on her MSNBC show Morning Joe on Wednesday, before addressing the president directly.
She questioned how the president could subject the family of a congressional aide - who authorities said died of natural causes in Mr Scarborough's office in 2001 - to such "BS".
"Donald, you're a sick person," Ms Brzezinski said. "You're really a cruel, sick, disgusting person."
She said the president's tweets were merely a ploy to deflect from the Covid-19 pandemic because her husband "speaks the truth" about Mr Trump's "lack of ability to handle this massive human catastrophe".
MSNBC, Ms Brzezinski and Mr Scarborough have been highly critical of the president's handling of the US coronavirus outbreak. Countrywide, cases have surpassed 1.5 million.
Ms Brzezinski then turned to Twitter, saying the company should remove Mr Trump's tweets.
"You should be ashamed of yourself," she scolded the social media giant.
It is by no means the president's first clash with the couple. In 2017, he referred to Ms Brzezinski on Twitter as "low IQ Crazy Mika" and claimed she had been "bleeding badly from a face-lift" when he saw her once near his Florida home.
What did Trump say and what are the facts?
On Wednesday, Mr Trump complained that his convicted former adviser Roger Stone had been treated unfairly, "while guys like Low Ratings Psycho Joe Scarborough are allowed to walk the streets? Open Cold Case!"
Last week he tweeted: "When will they open a Cold Case on the Psycho Joe Scarborough matter in Florida. Did he get away with murder? Some people think so. Why did he leave Congress so quietly and quickly? Isn't it obvious? What's happening now? A total nut job!"
The president first directed the baseless charge at Mr Scarborough in November 2017, suggesting he should be fired "based on the 'unsolved mystery' that took place in Florida years ago".
However, the case the president is apparently referring to is not a cold case.
Mr Scarborough is a former Republican congressman who represented a Florida district from 1995 to 2001. In July 2001, a member of his staff, 28-year-old Lori Klausutis, was found dead in the lawmaker's office in Fort Walton Beach.
Mr Scarborough was in Washington DC at the time. Despite the president's suggestion of something untoward in his exit from Congress, Mr Scarborough had stepped down before Klausutis' death.
Authorities determined Klausutis died after losing consciousness from an abnormal heart rhythm, before collapsing and striking her head. She had told a colleague a day earlier that she felt unwell.
Police found no foul play and a medical examiner established Klausutis had suffered an acute subdural hematoma, or blood clot, ruling her death accidental.
After Mr Trump's tweet about the matter on 12 May, Mr Scarborough said live on air: "Why don't you turn off the television, and why don't you start working, OK?"