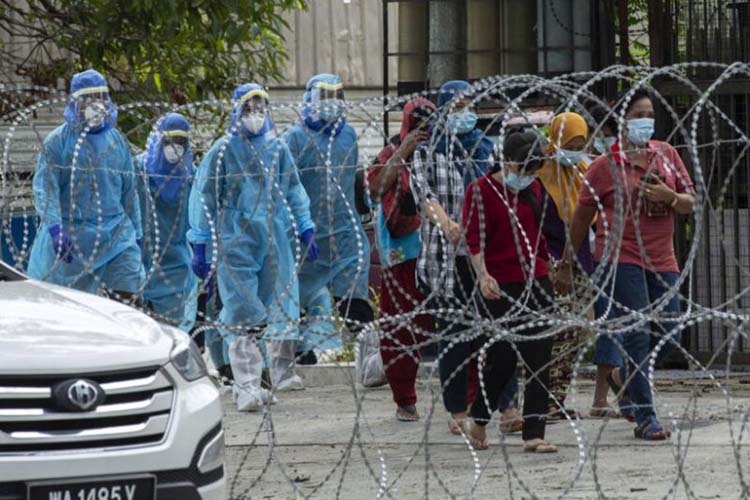 Malaysian authorities have detained more than 1,800 migrants in at least two raids. -EPA
Malaysia reported 35 new coronavirus cases at an immigration detention centre on Thursday, after authorities rounded up undocumented migrants this month in areas under lockdown.
The United Nations has called on Malaysia to stop the crackdown, which it said has spread fear among migrant communities in South-east Asia's third-largest economy, which has so far reported 7,059 cases, with 114 deaths.
Malaysian authorities have detained more than 1,800 migrants in at least two raids as part of efforts to contain the spread of the coronavirus, raising concerns they could instead raise infection risks in overcrowded detention centers. The health ministry said on Thursday it had 35 confirmed cases at the Bukit Jalil immigration detention centre.
located in the outskirts of the capital Kuala Lumpur, out of 645 people who were being held in one block at the centre.
"The source of infection is still under investigation ... we need to investigate in detail before making any comments," the ministry's Director-General Noor Hisham Abdullah told a daily news conference broadcast live on national television.
Noor Hisham said the 35 positive cases include 17 people from Myanmar, 15 from India and one each from Sri Lanka, Bangladesh and Egypt.
They were detained before Malaysia imposed movement and business curbs on March 18, aimed at containing the spread of the pandemic, and did not have any interaction with others who were detained after that, Noor Hisham said.
Felipe Gonzalez Morales, the UN's Special Rapporteur on the human rights of migrants said on Wednesday  that Malaysia's approach was not helping to curb the coronavirus pandemic.
"The current crackdown and hate campaign are severely undermining the effort to fight the pandemic in the country."