'Games without fans sadder than dancing with your sister' 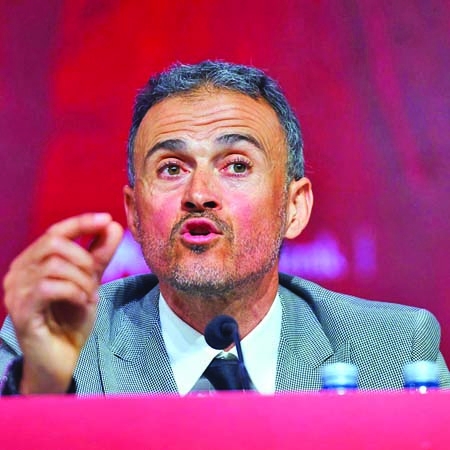 Luis Enrique
Spain coach Luis Enrique says playing behind closed doors is "sadder than dancing with your own sister", as football faces the prospect of games without supporters for the foreseeable future due to the coronavirus pandemic. Germany's Bundesliga became the first major European league to resume last weekend following the two-month shutdown, with strict hygiene measures enforced at all matches across the country.
"(Playing without fans) is sadder than dancing with your own sister. It's not attractive," Luis Enrique told the "Colgados del aro" ("Hanging from the hoop") basketball show on Wednesday.
"I watched the German football and it's a sad sight. You hear the voices, you even hear the insults... you lose the intimacy of the better moments. "But you also have to understand it's a business that generates lots of money, and even if the spectacle is a long way from that when there's fans it can help in dealing with the confinement. "Watching football again or any other sport, as a fan it's interesting," he added.
Luis Enrique returned to his job as Spain coach in November after resigning last June to take care of his daughter, Xana, who died in August of cancer. "(As a player), I would have liked to get back playing as soon as possible. I have no fear," he said.
"I was a bit scared at one moment for my parents, my in-laws and the elderly people I cherish and above all for the people who may suffer. But on a personal level, I have zero fear."
Euro 2020 has been postponed by a year due to the health crisis and Luis Enrique admitted the uncertainty was affecting everyone involved. "We're going day by day. We're waiting for football to return and later down the line we will restart with some friendlies.
"In theory, the national team should play friendly matches in September as usual. But there are more important things right now so we need to be patient."